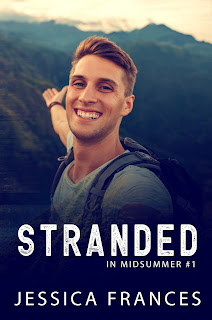 
Jessica Frances is a new-to-me author, although I have come across her Love at First Crime titles on Goodreads and Amazon quite a few times before. My introduction to her writing comes by way of the first in her new In Midsummer series--a series that I really hope isn't limited to just the two books featuring the current pair of main characters, but more on that later. Readers are immediately introduced to Conner Sherwood, a social media influencer who's just turned thirty and decided it was time for an adventure. Leaving behind his home, almost all of his things, and his best friend in Chicago, Conner buys a car and gets on the road. Unfortunately, four days in and his car stalls outside a small town in Arkansas called Midsummer. He's not sure if he's fit for a place like it, and not even finding an instant friend and hooking up with the hot sheriff may make him stay. Being the prime suspect in a murder though? Well, that may guarantee Conner won't be leaving anytime soon.

I love when I read a book that allows me to not only discover an author whose work I've never read before and turns out to be the first in a promising series. With a cast of characters like the one found in the series starter, I'm already hoping that Jessica Frances will have stories waiting for at least two supporting characters--barring their turning out to be villains in disguise--once Conner Sherwood and Rocky Green get their act together, although at this point, it's more the latter than the former. The writing was on-point and Frances made sure to keep the pace at a steady clip. Figuring out the mystery here was fun, especially since I changed my mind as to who the villain was once another character was introduced. As for the romance, I appreciated that it was complicated, what with Rocky being a single parent to his ten-year-old daughter, River, and his issues with commitment. I love it when that expected happy ending is earned! So yes, there's a wee bit of a cliffhanger here, but not an evil one. Five stars for Stranded and counting the days to Separated. 🖤