Review: Tempted by Love by Melissa Foster (The Steeles of Silver Island #1) 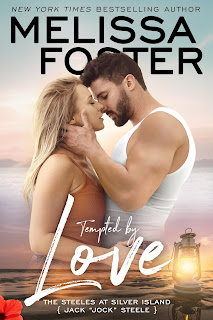 Anyone familiar with Melissa Foster's books knows that they're tied together in one way or another, whether it be through family or a close-knit circle of friends or a united community. With SO many published titles, I know that the idea of diving in can be daunting, but here's the thing with Foster's stories: you can easily start any of the series she has and go from there. If there are any recurring characters from stories past and they pique your curiosity, add the books to your to-be-read list. Seriously, you won't feel like you're missing anything of vital importance, i.e. something that may affect what's happening in the book you're currently reading. So, with that being said, if you're new to this author and you've been wanting to read something of hers, I'm highly recommending you check out her newest series starter!

Tempted by Love is the first novel in the Steeles of Silver Island series, which I think is a spin-off of the author's Bayside Summers series given that the main characters in this new book currently live in Bayside Resort, one being an employee and the other as a close friend of the owners. The story is about thirty-two-year-old Jackson Steele, aka Jock, whose debut novel became a bestseller but whose personal tragedy led him to move away from Silver Island and his family to find solace as a caregiver to a retired actor for a decade but passed away a year ago, and twenty-six-year-old Daphne Zablonski, single mom to a nearly three-year-old daughter named Hadley and an office administrator at the resort with dreams of returning to the world of event planning. They've noticed each other for the past year, but can Daphne really see herself falling for a man with an aversion to children--including her own Hadley?

This is the sort of story that I must insist you don't make any assumptions within the first few chapters. Admittedly, Jock's reactions towards Hadley may not endear him to readers immediately, but trust me, there's a reason why he reacts that way he does towards kids. And that's the thing I loved most about this book--I loved getting to know both Jock and Daphne, who are just about two of the richest main characters I've had the pleasure of "meeting" this year in fiction. Life has been challenging for these two, yet they have such a strength of character that becomes more evident with each new chapter. I also appreciated that Hadley wasn't portrayed as some perfect toddler who smiled and giggled all the time but was presented realistically? Tempted by Love is a wonderful five-starred beginning to the new Steeles of Silver Island series.