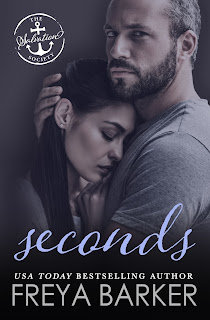 Note: An advanced reader copy (ARC) was provided by the publisher via Candi Kane PR.

I make no secret of my love for Freya Barker's writing, so when I found she was one of the authors who was part of the first batch from Corinne Michaels's Salvation Society project, I knew there was no way I was going to miss reading her book. To be fair, I've only read two so far, but Seconds is most certainly my favorite and it's set the bar immensely high for anything and everything to follow. Taking her inspiration from Michaels's Belonging duet--which is comprised of Beloved and Beholden, the first two books in the Salvation book universe--Barker's book is all about Jackson Cole's "baby sister", Reagan, who happens to be a defense lawyer, and one of his most trusted friends, Callum, a bail bondsman who works in the same building as Reagan.

When forty-year-old Reagan Cole made the move from Norfolk to Suffolk, all she wanted was to leave her career at the firm and her failed marriage behind. What she didn't expect was for her ex-husband to move across Virginia as well, taking a job at the Commonwealth's Attorney's Office. She's going to have to face him yet again because her latest client is forty-five-year-old Callum McGregor, owner of McGregor Bail Bonds. He also happens to be "Mac", a man who went through BUD/S training with her brother, Jackson, and became one of his closest friends after. Cal's been charged with a crime he says he didn't commit, and something about the man tells her he isn't guilty. The problem now is proving it while trying hard not to fall for him.

This book was a fast-paced read, and I think it's possibly the "shortest" that I've read from this author, not that her other books are sagas, but in terms of number of pages. I make this point because even if this is shorter when it comes to length, it didn't affect the quality of the story and characters one little bit. There was no skimping or rushing--this was still very much a Freya Barker story, one with romance, mystery, suspense, and action. I loved that both Reagan and Cal were such rich characters who were both firmly established in their professional lives. They weren't necessarily looking for love, but it certainly found them anyway. The supporting characters were great, and Jackson pops in. Seconds was another five-starred read from Freya Barker.