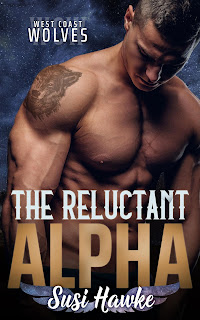 I may have read very single one of Susan Hawke's books that's been released so far, but I'd yet to read any of her titles under her Susi Hawke moniker...until now! Yep, I have finally--FINALLY!--popped that particular romance fiction cherry, and it looks like my first foray into Hawke's omegaverse writing was a fabulous choice. The Reluctant Alpha is the first novel in her brand-new West Coast Wolves series, and it sets the bar remarkably high for the next four (I'm assuming there are five books total because this fictional motorcycle club consists of five wolf shifter alphas, but I could be wrong.) books. This new series is a complete standalone, or at least that's how it felt to me, so nothing else needs to be read prior to jumping into this starter.

When the time came for Matthias Longclaw to make the choice to stay and take his rightful place as the alpha heir of his pack at eighteen, his decision was the one that was best for him--he walked away. That's what happens when you have an abusive father and a pack where the adults did nothing to help him. In the decade since he left Lucerne Valley, he's formed a family with four other alphas who were rejected by their respective packs. The West Coast Wolves was an MC that was about brotherhood and doing the right thing. So when an old friend calls Matt and asks him to return to their small California town to help Elisha Whitetail, the nineteen-year-old alpha mate of his uncle, Matt knows he has to go back--to save Eli and his home pack.

I loved, loved, LOVED how original this story felt to me. The combination of wolf shifters who were all alphas belonging to a motorcycle club and then each one becoming alphas of their own packs was so darn fascinating as much as it was entertaining. I enjoyed my time with Matt and Eli and the four other members of the West Coast Wolves--Tucker, Nick, Devon, and Lucian--as well as the rest of the residents of the Longclaw Packlands. I liked the idea of an alpha and their alpha mate being on equal footing and how each of the WCW came to their own packs. The idea of secondary alphas was intriguing, as was the idea of an alpha not being claimed by their father. Gah! I'm going to need more soon! Five stars go to The Reluctant Alpha.

Purchase The Reluctant Alpha on Amazon.