Review: Play with Me by Brittany Cournoyer 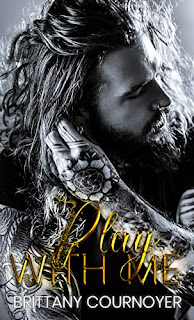 Play with Me is the newest book from Brittany Cournoyer, and it's my third AND favorite read from her (so far!). I REALLY hope this is just the first in a new series because aside from the main characters and their romance, there are certain supporting characters who appear to have a bit of a spark when paired together. So yeah, fingers crossed since I have no clue if we've got other novels coming in this book universe, but moving on... (even though I don't really want to because I need to know that there's hope for a number more books featuring this cast of characters!!!)

This book features a guy who's trying to restart his life after end of his engagement with his longtime girlfriend and finds himself attracted to another man. Foster Morgan is starting from scratch, and while his new apartment is more of a shoebox than anything else, he's got a good job as a bartender at Clancy's, a popular jazz bar. When a band called The Messengers plays their first gig in the bar, Foster is impressed by their music, but it's their saxophone player who truly leaves him stunned. Stellan Abernathy is a mechanic during the day, and a musician at night, and with his long hair and countless tattoos, Foster is at a loss as to how to deal with his attraction to someone of the same sex, but he certainly can't wait to find out more.

I loved the chemistry between Foster and Stellan, and that it took a bit before they actually decided to act on it. There is angst, but there isn't any drama, and I know some people consider those the same thing, but they aren't. I appreciated that Brittany Courneyor didn't thrown in the latter for the sake of stirring up stuff, but peppered it with some of the former to make the story even more interesting. From the story to the characters, I adored this book. No, this wasn't perfect. There was a bit of repetitiveness as well as a timeline issue with Foster saying he was with his ex all throughout high school and then afterwards and making marriage the next step but then pointing out later in the book that he'd been in other relationships but he and his ex had broken up recently. But otherwise, Play with Me was an endearing and enjoyable M/M romance and it gets 4.5 stars. (More from this book universe, please!)

Purchase Play with Me on Amazon.