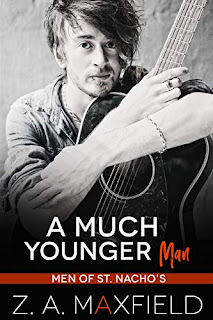 My first read from Z.A. Maxfield was back in 2014 (Hell on Wheels, Bluewater Bay series #3), and it took a few years to follow that up in 2017 (All Wheel Drive, Bluewater Bay series #18). And here we are, more than three years later, and I'm reacquainting myself with Maxfield's writing. A Much Younger Man is the opening salvo in her new Men of St. Nacho series, which is a spin-off of her popular St. Nacho series (which has been on my to-be-read list for a really long time, but it's on Kindle Unlimited, and I FINALLY have a KU subscription, so yay!). I was able to read this series starter without having read the prior series and didn't feel like I was missing anything, so it's safe to dive in if you're new to the author or the St. Nacho bookverse.

A Much Younger Man is the story of two men--one older who considers the California town of Santo Ignacio, nicknamed St. Nacho by the locals, his new home; the other younger and homeless, unsure if this new place is another pitstop or one he can finally put down roots in. When thirty-eight-year-old veterinarian Linden Davis spots a young man busking on the streets of his new hometown, the combination of his undeniable musical gift with his guitar and his four-legged furry companion named Calliope is alluring. He's initially drawn because of his concern for the Chocolate Labrador that his owner lovingly calls Callie--or so Lindy tries to convince himself--but Christopher Beckett is irresistible. Soon, twenty-year-old Beck is under his skin. But what future can Lindy and Beck have with so many differences between them?

This series starter was a good one, with two main characters who didn't seem to have a whole lot in common at first glance. There's an eighteen-year age difference as well as the fact that Lindy owns a veterinary practice, a home, a car, and a drama queen cockatiel named Rico Suave (snort laugh), while all that Beck considers precious to him is his acoustic guitar and his beloved dog, Callie. They have their share of insecurities, but that connection they had was one that deserved to nurtured and cherished. Of course, there's the whole other complication of people who don't exactly approve of them togethr because of all the stuff I mentioned. Sometimes, Lindy got in his own way, and seriously, the guy frustrated me to bits, but there was no denying how much he cared about Beck. Speaking of Beck, I just wanted to give him a big hug and snuggle up with Callie. A Much Younger Man easily gets 4.5 stars.

Purchase A Much Younger Man on Amazon.