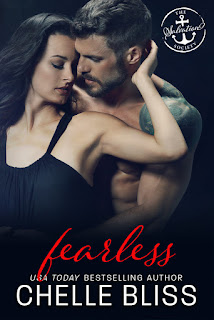 Note: An advanced reader copy (ARC) was provided by the publisher via Candi Kane PR.

Fearless by Chelle Bliss marks my first foray into the Salvation Society, which is a collection of multi-authored books inspired by Corinne Michaels's Salvation book universe (the Belonging duet, the Consolation duet, Defenseless, Evermore, and the Indefinite duet). This title also happens to be my introduction to Bliss's writing! Shocking, I know. I honestly thought I'd read at least one book penned by her in the past, but a quick search of my blog and Goodreads reviews prior to the launch of my first blog, Bookaholics Not-So-Anonymous, shows that I've been remiss in my reading.

This was a fairly quick read, and it works well even if you aren't familiar with Corinne Michaels's Salvation book world or Chelle Bliss's Men of Inked series. I've read some but not all of the Salvation titles, although I have read Defenseless, which is the story of the female main character's parents, and with Bliss being a new-to-me author, I've yet to meet her, erm, inked men. But yeah, I was able to still enjoy this and not feel absolutely lost--although I admit that now my curiosity is getting the better of me, so thank goodness I have several of the Men of Inked books on my tablet.

Makenna Dixon is a twenty-three-year-old spitfire, ready and raring to formally start her career in the Navy. She's got some downtime before she has to spend months on a ship, but she certainly didn't expect to be ditched by her friend their first night out. Maybe some good came out of it because Mak meets Austin Moore, a hot guy who early on gets that she's not some damsel in distress needing rescue. But there's a connection between them begging to be explored. The problem is, he's not a regular guy--he's a twenty-five-year-old SEAL, and dating outside one's rank is a major no-no.

I liked the chemistry that Mak and Austin shared, and how there was somewhat of a friendship that was flourishing right beside the romance that both were trying to tamp down. Another thing I really appreciated seeing was Mak's relationship with her family, especially her father, and Austin's own relationships with his older brother and the extended family he found through his sister-in-law. Family was clearly an important component to Mak's and Austin's histories, even as they sought to pave their respective paths as members of the Navy and ably serving their country.

I was confused, though, with Austin's age because Mak kept making him sound older, thinking at one point that he was ten years older. When she discussed him with her roommate and mentioning he was older, there was surprise, and Mak was worried her father wouldn't be accepting, what with Austin being "older". Austin said he was twenty-five, but then he moved in with his brother at seventeen because of what happened to their mother, which was a decade prior to his story with Mak, so that would make him twenty-seven. The age thing aside, Fearless was still a four-star read.