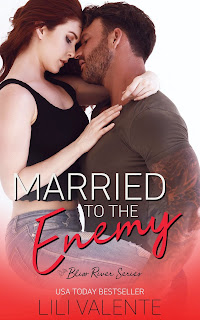 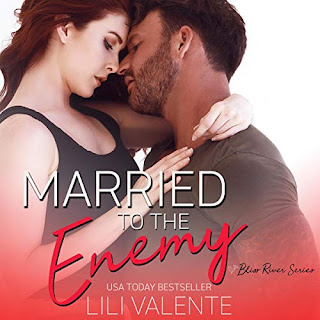 Note: An advanced reader copy (ARC) and advanced listener copy (ALC) were provided by the author.

From the moment I finished reading and listening to Bliss River series starter Dating Dr. Dreamy, I was counting the days before I could get my hands on the second book, and I adored it as much as I did the first one! Married to the Enemy is a second-chance romance slash enemies-to-lovers story and it features the eldest among the three March sisters, twenty-eight-year-old single mom and pastry chef Aria, and the town's thirty-one-year-old police captain, Nash Geary. It was more than a dozen years ago when Aria and Nash met at art camp, and the connection between them was undeniable. But she was only fifteen to his eighteen and when they were caught, everything fell apart. Years later, Aria finds herself being challenged by her daughter Felicity's father for custody. At the same time, Nash is reeling from the news that his ex is engaged to the guy she was cheating with six weeks after he caught them. Aria needs to prove she's better equipped to have custody of Felicity, and Nash wants to show his ex he's moved on, especially after he claimed he was about to become engaged. Can these two be what each other needs and turn fake into very much real?

Ooh, Aria and Nash brought the heat and had a lot of heart! Add to that Skeeter, erm, I mean Felicity, and the whole family dynamic was just too adorable to resist. These two held on to their animosity towards each other for a dozen years, and I understood why they went from young lovers to sworn adversaries. I appreciated that they led separate lives and had their own share of experiences because they did need some growing up. I'm also not one of those readers who expects the main characters in a second-chance romance to not become involved with other people, especially when the separation lasts for quite a number of years. That's just flat-out unrealistic to me--or maybe I'm being cynical, but I'm not going to complain about main characters who live their lives outside of each other when the original run of their relationship ends. I liked seeing Aria and Nash get to know one another again, and create their own dynamic as a couple and a family alongside Felicity. There is some drama, but not from within their little unit, and that added an interesting angle. What made this even book even better was listening to Jason Clarke and Lili Valente narrate. Could these two get any better as a voice-over duo?! There's a reason why their partnership is one of my personal go-tos. Five stars go to Married to the Enemy.

Purchase Married to the Enemy on Amazon and Audible.