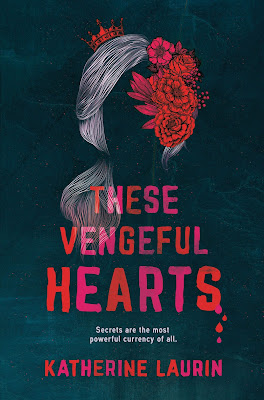 About These Vengeful Hearts
Mean Girls meets Siobhan Vivian’s The List in These Vengeful Hearts, an utterly addictive standalone YA debut that follows 16-year-old Ember Williams as she seeks revenge against the Red Court, a secret organization of Heller High’s most elite female students that specializes in granting and requesting favors—and which is responsible for the accident that left her older sister paralyzed.

A thrilling novel about a secret society and the dangers that lie in wait for anyone brave enough to join—perfect for fans of Karen M. McManus, Kara Thomas, and Maureen Johnson.

Whenever something scandalous happens at Heller High, the Red Court is the name on everyone’s lips. Its members deal out social ruin and favors in equal measure, their true identities known only by their leader: the Queen of Hearts.

Ember Williams has seen firsthand the damage the Red Court can do. Now, she’s determined to hold the organization accountable by taking it down from the inside. But will the cost of revenge be more than she’s willing to sacrifice?

“Ember draws readers into the drama of finding the members of the Red Court…
Recommend this to fans of E. Lockhart’s The Disreputable History of Frankie Landau-Bank
and Daisy Whitney’s The Mockingbirds.”
–School Library Journal

“Laurin’s novel tackles the destructive power of high school bullying
through characters who are compelling in their complexity.”
–Kirkus Reviews

Add These Vengeful Hearts on Goodreads.

An Excerpt from These Vengeful Hearts
chapter one

Of the ways I’d want to start a Monday, finding a car covered in blood was not one of them. The murmurs began just after first period, and fragments of muted conversation led me out to the Heller High parking lot. I was curious to see the spectacle drawing so much attention.

The crush of students flowing out of the school buoyed me along in a tide of bodies. Between gaps in the crowd, I caught glimpses of the word smeared across the car’s wind¬shield in blood red relief.

Gray clouds hung low, casting the macabre tableau in wa¬tery light. The chill that slithered up my spine had nothing to do with the brisk October morning. I skirted a group of girls in front of me, recognizing familiar faces from my ge¬ometry class, and found myself staring down at the thick crimson streaks. The letters looked nearly dry, and I couldn’t fight the morbid impulse to touch them. A distinct tackiness remained. Was it corn syrup or actual blood? I didn’t care to investigate further.

There was no proof that the infamous secret organization made up of Heller High’s elite even existed, but this exhibition had all the makings of a Red Court takedown. Whispers from the ring of students surrounding the car reached me and I stepped backward, edging away from notice until I was part of the throng gathered to witness the scene. It didn’t seem like anyone was paying attention to plain old jeans-and-a-tee-every-day Ember Williams. Good.

Other words, some so ugly I couldn’t look at them for more than a moment, marred the rest of the car’s windowed surfaces. My eyes skipped to the girl huddled beside a tree next to the parking lot. Tears stained with mascara ran in inky rivulets down her cheeks. Two of her friends rallied around her, whispering softly.

No amount of consolation was going to wash away the stain from this one. More than a few heads from the crowd were turned in her direction. I didn’t know her name, but I had a feeling she’d be remembered as that girl, the one whose car was vandalized with blood. She’d been marked by the words we’d all seen: liar, cheater, tramp.

Why did the Red Court target her? Who wanted this girl humiliated—to be brought so low in front of the whole school? Or had she been reckless enough to throw in with them and ask for a favor she couldn’t repay? No. The vulnerability in her expression was too raw to fake. This girl was a pawn in the Red Court’s game. The pull to learn more about the group known for dealing out ruin and favors in equal measure went beyond cursory interest. I needed to know more.

My stomach gave an uncomfortable tug, as if my body was eager to put distance between me and the girl now that I’d seen the damage. A sob shuddered through her, and I tore my gaze away, shifting my feet and noticing a stickiness below my sneakers. A thick coat of red clung to the bottom of my shoes, marking me too. Ugh. I must have stepped in a pool of the blood. I told myself it was fake blood because I couldn’t stomach the alternative. I’d have to go change into my running shoes before next period.

“Everyone back inside,” a teacher called from the main doors. His tone left no room for argument.

The mass of students quickly dissolved, moving back into the school. The whispers rose to chatter as theories were passed around like mono on prom night. I trailed behind a couple holding hands as they maneuvered through the crowd.

“This is the worst one so far,” the girl said.

Her boyfriend scoffed. “Worse than the video of Brett Shultz’s keg stand? No way. He got kicked off the football team for that. Brett had Division I schools scouting him, too.”

A rogue Facebook account cropped up just after the school year began with some incriminating footage of the varsity running back at a party in a stunning display of upper body strength and chugging technique. The video made it all the way to Principal McGovern, who reluctantly had him removed from the team, along with the school’s shot at a state title.

“Do you really think she cheated on her boyfriend?” someone behind me asked.

“Does it matter?” his friend responded.

I shook my head in silent reply. It didn’t matter. That was the power of the Red Court; gossip and innuendo were all it took for a star student to fall from grace after accusations of cheating.

As I passed a small cluster of teachers just inside the doors, I stepped nearer to catch the edges of their hushed exchange.

“—needs to do something.”

“I know the policy, but this is beyond ‘bullying.’ It’s the third time since the school year began.”

This may have been the third public display of destruction in the last six weeks, but it was hardly the third time the Red Court had struck. Their takedowns were legendary and highly visible to ensure maximum exposure, but they also excelled in the small things no one would notice unless they were looking for anomalies. My eyes were wide open.

For as long as anyone could remember, there have been rumors that the mysterious Red Court was pulling the strings behind the scenes at Heller High School. Its ranks were shrouded in mystery, but its influence was undeniable. Rigged Student Council elections, changed grades, and ruined reputations were all in their repertoire.

Half of the school treated them like the Boogeyman, the near mythical thing that was out to get you. It was easier to deny their existence than to acknowledge the specter of their presence. Takedowns like the one outside were as likely to be attributed to the Red Court as they were to be pinned on anonymous wannabes posing as the Red Court to allay suspicion. It seemed like the other half of the over two thousand students at Heller made a sport of trying to guess which members of the prom court were legitimate and which ones owed their wins to the Red Court.

But I knew the truth.

The Red Court was real, and I needed in.

These Vengeful Hearts is her first young adult novel.