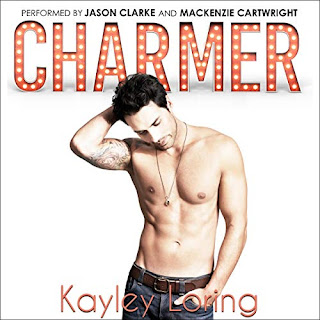 Ah, there's nothing quite like spending the day with a Kayley Loring audiobook, especially when it's an audiobook of one of my favorite romantic comedies this year AND it's narrated by two of my favorite voice-over talents, Jason Clarke and Mackenzie Cartwright! When it comes to Loring's stuff, I look forward to reading her books and then seeing, or well, listening to how it translates into audio. She seems to have a knack for having the best pairings for her audiobooks--or at least the ones I've had the opportunity to listen to. All of the ones I've listened to have Cartwright as the female VO, but this time, she's paired with Clarke, making for an awesome twosome for an equally awesome story.
From a teen heartthrob to an up and coming singer and songwriter, Nico Todd's career's been the stuff of dreams, and he hasn't even hit thirty yet. But while his professional life is nothing to sneeze at, his personal life...well, that has him making wishes that have yet to be granted. After all, he's been going to the same diner for some time, spending hours hoping a certain twenty-seven-year-old waitress will finally see him as more than a customer. It's not like Kat Dempsey hasn't taken notice of just how hot Nico is. She's not blind, but her main priority is her six-year-old son, Tate. But Nico has his sights--and his heart--set on both Kat and Tate, and he'll do anything to prove that he's all in with them.
Resistance is futile! I dare romance listeners like me to not fall in love with Nico and Kat's story. And let's not forget Tate! Speaking of Kat's son, can I just say that I appreciate the fact that the kids in this still untitled series of Kayley Loring's aren't there for decoration? They play major roles in pushing their respective stories forward, so kudos to Loring for ensuring that Tate had a voice in his mom's story. Loring knows how to write romantic comedies, with a fine balance of both elements with smart humor and snappy wit plus swoon and lots of it. After listening to this, I couldn't imagine anyone other than Jason Clarke and Mackenzie Cartwright narrating. Super le sigh! Five-plus stars go to Charmer.