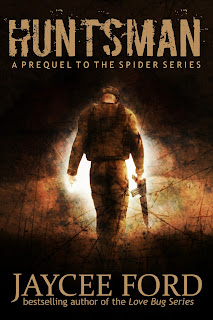 Huntsman is the prequel novella to author Jaycee Ford's Spider series and it's the second chance love story between Mike Schuler and Grace Collin. At eighteen, Mike decided to join the Marines as a way to create a better future for himself and the love of his life, Grace. It's a decision that she isn't happy about but one she ends up supporting nonetheless. But being a Marine forces Mike to bear witness to things that change his life forever, events that he can no longer un-see and friends he no longer has by his side. He is no longer the young man he once was and decides that he isn't worthy of Grace...or the daughter he left behind, the same one who has no idea that he's her father. But now he's back in their hometown, and Mike will have to decide if he's now ready to fight for Grace, for their daughter Chloe, and for the family they're supposed to be or if he'll forever drown in memories.

This was a good novella, one that tells a complete story without any evil cliffhangers that'll have you antsy to get your hands on the full-length novel that follows. Mike's dealing with PTSD as well as a great deal of personal loss and guilt, both as a Marine and as a man. It's a story with some heavy moments but they're also balanced out nicely with lighter fare courtesy of Mike's efforts to reconnect with Chloe. I wish that we could have delved more into the reasons behind Grace's not telling Chloe Mike was her father, and I found it a bit odd that Chloe seemed to have such a deep connection with Mike even though Mike admits he didn't spend as much time as he would have wanted to before he returned to war. There wasn't an actual resolution to his relationships with his mother and sister either, especially if this is it for Mike and Grace's story, as I would assume based on the happy ending we get.

The book has a supernatural element to it which helps Mike resolve his issues with Grace, and I'm not entirely sure how I feel about that. I appreciate its use and my hesitance has nothing to do with whether I believe in ghosts or feeling the presence and holding conversations with those who have already passed. My hesitance comes from my wanting Mike to have resolved said issues with Grace on his own rather than relying on information given to him by his late father or being prodded by his deceased friend and fellow Marine to go after Grace. For the most part, though, I still enjoyed this prequel novella and am curious enough to want to see where the series will lead readers to next. I didn't really get a feel for any potential characters who could be telling their story next, or maybe we haven't met them yet, since "Spider" may have to do with Mike's old team in the Marines. 3.5 stars for Huntsman. ♥