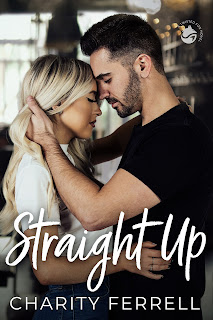 Note: An advanced reader copy (ARC) was provided by the author via Wildfire Marketing Solutions.
Straight Up is the third and newest novel in the Twisted Fox series penned by Charity Ferrell. When Lincoln Callahan ended up in prison for a white collar crime, it didn't matter if he declared his innocence at the top of his lungs. It was a fall from grace, and a spectacular one at that. The twenty-six-year-old former VP of a company that was raking in millions, Lincoln is now working at his brother's sports bar, Twisted Fox. All he wants to do is keep his hand down, live his life, and not court trouble. Well, trouble walks in and she's got a name--Cassidy Lane. The twenty-one-year-old had a plan, but all it took was her boyfriend to need clear her name as she was getting arrested. Now, everything gone down the crapper. She swears she's getting to stay as far away from bad boys as possible, but she's immediately drawn to ex-con Lincoln. Maybe he isn't the bad boy she thinks he is, and she can't resist getting closer. Do they have a future or will the past get in the way?
I confess, this was not my favorite book in the series or from any of the books that I've read from Charity Ferrell so far. I'm not saying it wasn't an entertaining read--it was, however, it doesn't quite have the same oomph that the first two books did. Lincoln was a good male main character, one that I enjoyed getting to know as the story progressed. On the other hand, Cassidy could be a teensy bit much at times. Maybe it was youthful exuberance or absolute confidence on her part, but yeah, it took quite a while for me to warm up to her. There was also quite a bit happening on both sides, what with certain people from their respective pasts willing to let them go, and everything was just super duper complicated, what with entanglements here and there. It was fun seeing familiar "faces" in the book, and I did enjoy the book as a whole, so Straight Up receives 3.5 stars.
----------------------------
Read my reviews for the Twisted Fox series: