Review: Not Without Your Love by Lexi Ryan (Boys of Jackson Harbor #7) 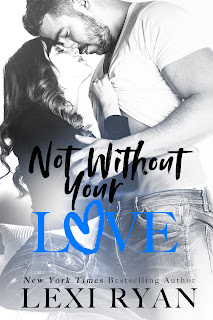 Note: An advance reader copy (ARC) was provided by the author via Grey's Promotions.
When I learned that Lexi Ryan was returning to her Boys of Jackson Harbor series, I must admit that I wasn't quite sure if I was was misreading what was right in front of me. My first thought was "YES!" and that was quickly followed by "But I thought the series was done already?!" But hey, who am I to complain, especially given the fact that I had that bittersweet feeling while reading what was originally the final book in the series? So, back we go to Jackson Harbor for one kinda-sorta-maybe (more on that in a bit) romance.
Not Without Your Love is the seventh and last book in the Boys of Jackson Harbor series. This is Colton McKinley and Veronica Maddox's story. He's best friends with Levi Jackson and the former fiancé of Ellie Jackson, neé Coudrey (Dirty, Reckless Love, book three of Boys of Jackson Harbor). She's the twin sister of Nicole Jackson, neé Maddox, and sister-in-law of Ethan Jackson (The Wrong Kind of Love, book one of Boys of Jackson Harbor). These two are probably the most unforgettable side characters in the entire series, and if you're a fan of the series, you'll know what I'm talking about. If not... go read those books!
This was an enemies-to-lovers romance, and all of that animosity brimming between Colt and Veronica was due in large part to the sexual tension. One of my favorite things about their story was the character development. My first impressions of these two were not exactly all that great, but I'm all about a well-written redemption story, and I loved seeing how far Colt and Veronica have come. These two have history together, but they also have rather dark back stories as well, so it was interesting how they tried to deal with their respective pasts while also striving to move forward and build a future together. 4.5 stars go to Not Without Your Love, and I'm excited for a return to Jackson Harbor. *Wink*
-------------------------