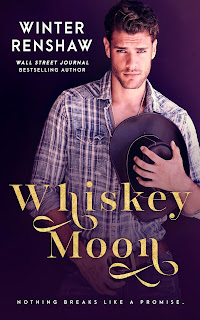 Note: An advance reader copy (ARC) was provided by the author via Ardent PRose.
With as many books as I read, it's easy to clump a lot of them together, being good reads but not necessarily standouts. Then a Winter Renshaw book lands in my Kindle Fire, and it's like a reminder that the extraordinary still exist among the legions of ordinary. Whiskey Moon is the latest standalone from Renshaw, and it's a second-chance romance involving high school sweethearts Blaire Abbott and Wyatt Buchanan who enter into a marriage pact with each other at eighteen only for one of them to ghost the other soon after. It takes ten years before they see one another again. Blaire wants answers in hopes of closure, but he can't readily give them to her, not when it could cost Wyatt everything.
There's something about Winter Renshaw's that just clicks with me. I may have only had the opportunity to read a handful of her stuff, but I've yet to be disappointed. Blaire and Wyatt's story was one that I thoroughly enjoyed. I so felt for these two, especially when bits and pieces of what led to their estrangement came to light. I'm not usually a fan of main characters who keep something from their significant other and then go on to end their relationship believing it was what was best for everyone concerned. In the case of Blaire and Wyatt, however, there was so much more at stake, and it was almost as if Wyatt had no other choice but to do what he did. I also appreciated that it took a bit for these two to rebuild their relationship, even though they still loved each other after a decade apart. Whiskey Moon five stars and I so wouldn't mind more from the Buchanans.
Release Date: 29 October 2021
Date Read: 28 October 2021
Learn more about Winter Renshaw.
Pre-order Whiskey Moon on Amazon.