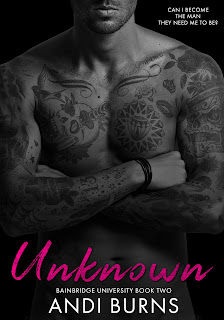 Note: An advance reader copy (ARC) was provided by the author via Grey's Promotions.
It's only been a little over three months, but waiting for the second book in the Bainbridge University series felt like forever! That's what happens when the first book, Uncovered, easily became one of my favorite reads the month it was released, leaving me all antsy for this second one from Andi Burns. Unknown is Knox Gallagher's story, but the rest of the guys, Tyrus Marshall (from Uncovered and is with Phoebe James), Caleb Whitman, and Booker Zabek are ever-present, but not overbearingly so, because that's what best friends who have become family do. Knox shares his second chance romance with Willa Taylor Forsyth, the girl he shared a memorable night with during their last week in high school. But she upped and disappeared, and since then, his life has steadily spiraled out of control. Then Knox sees Willa once again, but has too much changed between them?
This series is killing me softly, one angsty book at a time. In his twenty years, Knox may not have had the sort of tough life that meant not knowing where his next meal would be coming from, but his home life wasn't exactly the best, no thanks to his mother. On the other hand, it's not as if Willa had such an idyllic life either. These two had to battle through A LOT in order to get to their happily-ever-after. There were moments of hurt and frustration, but I understood where they were coming from. They earned that HEA of theirs, and they deserved to be together. I also appreciated how Knox's family situation was resolved. I swear, some people are simply not worthy to be parents, but that's all I'll say on that because I don't want to spoil the read for those who have yet to dive in. Andi Burns continues to impress with the Bainbridge University series. Five stars for Unknown.
Release Date: 27 October 2021
Date Read: 26 October 2021
Learn more about Andi Burns.
Purchase Unknown on Amazon.