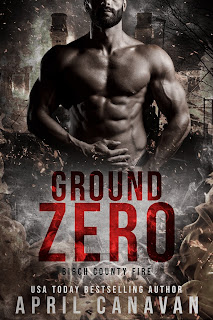 Note: An advance reader copy (ARC) was provided by the author via Wildfire Marketing Solutions.
Ground Zero is the first book in April Canavan's new Birch County Fire series, which is a spin-off of her Birch Police Department series (which, in turn, is a spin-off of the Birch County Blue trilogy). With so many ties shared, I highly recommend you read the previous books because there are a lot of characters from there that show up in this book (and I'm guessing the rest of the books to come). I only had the opportunity to read the first and last Birch Police Department books and I confess that I was a tad lost because there were mentions of events in the books in between, and again, I'm experiencing that bit of cluelessness with this new series starter. But hey, if you want to dive straight in (because I totally get not having enough hours in the day to read everything you want), I'm not going to stop you. There will be enough hints to help you along the way.
This is Virginia Davidson and Joshua Harmon's story, and while it may have all begun with a one-night stand and Nia leaving Josh while he was sleeping, fate steps in and has their paths crossing again when she realizes that they now both work in Birch County's Fire Department. Josh is a former police officer who decided to focus his attention solely on his other job as a firefighter; Nia is a paramedic after working a bunch of temp jobs while studying. Nia has an aversion to dating cops, courtesy of a harrowing experience with her ex who just happened to be, you guessed it, a cop. I won't mention what that aforementioned experience was, but when it was revealed, I confess that Nia slid down a couple of notches in my eyes. (Side note: Her ex deserved better and I hope he gets it someday.) Josh was great throughout and the story was good, albeit a wee bit predictable (it wasn't all that difficult to figure out who the arsonist was). I'm giving Ground Zero 3.5 stars.
Release Date: 31 October 2021
Date Read: 29 October 2021
Learn more about April Canavan.
Purchase Ground Zero on Amazon | Apple Books | B&N | Kobo.