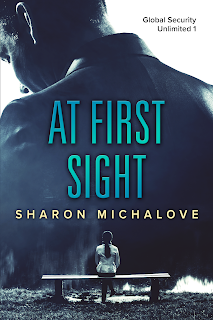 Note: An advance reader copy (ARC) was provided by the author via Grey's Promotions.
Sharon Michalove is a new-to-me author, and my introduction to her writing was by way of her Global Security Unlimited series starter, At First Sight. A quick peek at Michalove's list of published works has me thinking this is her first work of fiction, but I could be wrong. Either way, this a romantic suspense read featuring main characters Cressida Taylor and Maxim Grant. Their paths initially cross as students in Oxford, England in 1993--Cress as an American graduate student, and Max as an English undergraduate. It proves to be a short but memorable meeting. Fast forward two decades later, and the two meet again. She's a successful author facing anonymous threats and accusations of plagiarism. When Max suddenly shows up at a book signing, Cress is struck with both wonder and wariness. Can she trust the former spy or could he be someone far sinister?
One of my favorite things when it comes to reading something from a debut or new-to-me author is that feeling of promise--like I could potentially find someone whose work I would be excited to read in the future. Sharon Michalove certainly has potential. She doesn't skimp in terms of setting the scene and allowing her readers to picture how her characters look and act and what's going on to and around them. On paper, this book had a lot of what I look for in a romantic suspense read; unfortunately, I struggled connecting with both the story and the main characters. This was a slow burn, but it dragged at times and the burn was barely simmering. The lack of chemistry and tension had the book faltering, which of course, had me a bit disheartened. This ends on a happy-for-now note, with a sequel in the offing next year. All things considered, At First Sight gets three stars.
Release Date: 22 October 2021
Date Read: 22 October 2021
Learn more about Sharon Michalove.
Purchase At First Sight on Amazon.