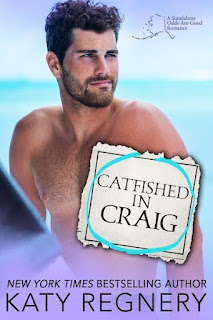 Note: An advance reader copy (ARC) was provided by the author via Elle Woods PR.

Don't get my wrong: Tessa is one hundred and fifty percent not my type. She's too big, too old, and she has too many problems. But, hell, she should still want me, shouldn't she?

Fuck, yes, she should. I should be the one to gently reject her, not the other way around...not that I want to be with her. Because I don't. Definitely not. Like I said, she's not my type.

But what red-blooded man wants to be friend-zoned? Shit. That's never, ever happened to me, and I don't like it one bit.

When I learned that Katy Regnery was returning to Alaska with a new novel in her Odds-Are-Good, I may have squeed in delight and done a happy dance--all in the privacy of my bedroom, of course. This series has become my favorite from Regnery, which was a difficult feat considering her A Modern Fairytale collection has held that top spot for years. I love how other than the main characters "meeting" via an ad placed in a magazine called Odds Are Good, each novel has a completely different story leading towards that guaranteed happily-ever-after. If only all personal ads led to the same happy ending. Not that I would know anything about personal ads since I'm super paranoid about these things and think I'll come across a serial killer. That got dark REALLY quickly.
Catfished in Craig is the fifth Odds-Are-Good novel, and it involves a hot guy in hiding in chilly Alaska, a catfishing single mom who's more Plain Jane than Jersey Girl on the run, and quite a few secrets between them. If it's one thing that thirty-three-year-old Tony Silvestri holds fast to when he places a personal ad in Odds Are Good, it's that the young woman he deems worthy must be "Tony material", aka in her early twenties, beautiful, sexy, and no children. So, when Theresa from Newark answers and even sends a photo, she's the girl of his dreams. They click quite nicely, but then, she shocks him by calling him shallow, breaking his hopeful heart in the process and pissing the heck out of him. So, what happens when her cousin, Tessa Rinaldi, shows up with her young daughter, Gia, in tow hoping he'll take them in while they're on the run from the same people Tony has been hiding from for the past three years? What will he do when he learns the truth?
Noteworthy character and story development AND fabulous writing? Yes, please, and thank you muchly! Katy Regnery did NOT disappoint, leaving me smitten with this new Odds-Are-Good romance. My expectations were astronomically high considering how much I loved the first four books, and Tessa and Tony's blew past said expectations without a glance back. This was a romantic comedy with a sprinkling of suspense and angst, and I was all for it. Yes, she catfished, and yes, he was a bit of a dog (see what I did there?), but these two were perfect for each other, even if their initial opinions of one another may not have exactly been glowing. The supporting cast of characters was impressively memorable, and naturally, little Gia most of all. I seriously hope Catfished in Craig isn't our last visit to Alaska, but if it is (no!), then what a five-plus-starred way to go!
-------------------------
Read my reviews for the Odds-Are-Good series: