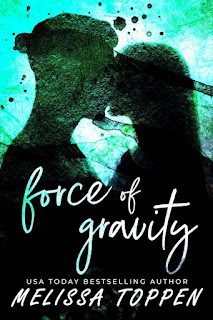 Note: An advance reader copy (ARC) was provided by the author via Give Me Books Promotions.
Force of Gravity is a new adult (NA) romance from Melissa Toppen employing two tropes, enemies-to-lovers and falling-for-your-best-friend's-sibling. Eighteen-year-old Barlow Ross loves that she has as close as relationship as she does with her twin brother, Brennon. She loves him enough that she tolerates his best friend, or at least she tries to--and fails often. Atlas Keaton is a major pain and has been in the decade she's known him. He pushes her buttons and does so on a regular basis. She'd happily keep her distance from him. Unfortunately, a mix-up with her dorm placement has left her without a place to stay for the first semester. Her only option is to stay with Brennon, and doing that means having to share space with Atlas, who happens to be Brennon's roommate. Four months may not seem like forever, but it could be if it means resisting the guy she hates.
I admit it; it took me a good, long while to warm up to Atlas. I had to remind myself that he, along with Barlow, was only eighteen. He was like the poster child for boys who crushed on girls but pulled their pigtails rather than pull them in for a hug. Of course, Barlow gave as good as she got because there was no way she was going to let Atlas get the better of her. Sometimes, these two hit below the belt, adding on to the tension between them, and there was A LOT of tension, sexual and otherwise, swirling. There was more to Barlow and Atlas than meets the eye, particularly the latter, and knowing him better allowed for a greater understanding of what made him tick. I appreciated Brennon being the sensible and patient one when it came to his respective relationships with the two and was happy he got his own happily-ever-after, too. Four stars for Force of Gravity.
Release Date: 29 October 2021
Date Read: 28 October 2021
Learn more about Melissa Toppen.
Purchase Force of Gravity on Amazon.