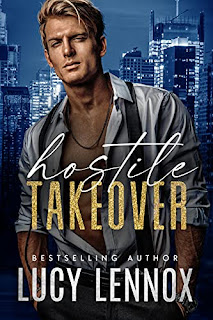 Note: An advance reader copy (ARC) was provided by the author.
Lucy Lennox has a brand-new series, and if the rest of it is as fantastic as the first full-length novel, then I've got a heck of a lot to look forward to in the coming months. Hostile Takeover kicks off the series with the same title, and it's a delicious, tension-filled enemies-to-lovers romance with a side of fake relationship trope thrown into the mix. It all starts with a prank gone wrong, one that leaves a student with a promising future stripped of opportunities that were already committed to him and another student strapped with guilt at the role he played and his silence afterward in the entire debacle. A decade and a half later and Grey Blackwood is on the cusp of exacting one last bit of revenge on those who cost him so much. York Capital is his for the taking, but the cherry on top would be to have Ellison York in servitude for two weeks in exchange for Ellison's parents not to lose their home. While Ellison may not have known anything about Grey's hostile takeover, Grey knows nothing about the man Ellison has become...or that Grey is the only man Ellison wants.
Goodness, but how this book had me so emotionally invested in everything that was happening between the main characters! I absolutely understood and empathized with Grey. Vengeance was his, and he had everything planned out. The thing was, that plan involved what he thought he knew of Ellison, but then thirty-five-year-old Ellison was not the same as twenty-year-old Ellison, and even the latter wasn't some vile human either. The circumstances these two found themselves in when they were students and now as adults played a lot into all the maneuvering and machinations going on. They were keeping each other on their toes, and at the end of the day, what was at risk was not just money and pride but their hearts as well. The character development when it came to Grey and Ellison was extraordinary, as was the story development and pacing. This had a fabulous cast of characters, and I loved seeing Marcel and Luca again (their story plays out in the free prequel!). Lucy Lennox has set the bar high with Hostile Takeover. Five stars!
Release Date: 26 October 2021
Date Read: 24 October 2021
Learn more about Lucy Lennox.
Pre-order Hostile Takeover on Amazon.