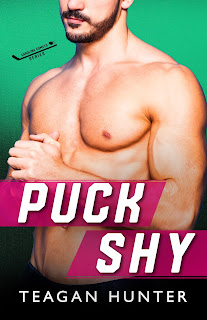 Note: An advance reader copy (ARC) was provided by the author via Valentine PR.
Teagan Hunter dives into her very first sports romance series with Carolina Comets, which features a fictional professional hockey team by the same name. Puck Shy is the series starter and it's got Collin Wright, a twenty-seven-year-old all-star defenseman, as the the first male main character to get his story told. He shares said story with Harper Kelly, a twenty-four-year-old artist who specializes in all things horror. The two meet when Collin's truck breaks down and Harper nearly runs him over with her car. I kid you not. She offers to take him to where he needs to go, and the two share a connection, but with no numbers exchanged, they go their separate ways. When Collin decides to try a dating app, he comes across "HorrorHarper"--and yes, it's his Harper. They're a match, but she has no clue that "HockeyGuy69" is him. How long can he keep the truth from her?
This was an impressive start to a new series. While this may be Teagan Hunter's first foray into the hockey romance trope, dare I say that she has nothing to worry about because the main characters had chemistry and the story captured and held my interest from beginning to end. Hunter's use of text messaging between her MCs and even with the rest of the notable and recurring cast of characters is one she's employed in other books, and its inclusion here provided a nice reminiscent touch. Another very Hunteresque touch is how easily likable her MCs are, and that's exactly what Collin and Harper were. I enjoyed their exchanges and it was clear that they melded well together. Collin was a sweetheart, and Harper was quirky, and they simply clicked. Puck Shy easily gets 4.5 stars, and I'm already excited to read even more from the Carolina Comets series.
Release Date: 28 October 2021
Date Read: 28 October 2021
Learn more about Teagan Hunter.
Purchase Puck Shy on Amazon.