Review: Just One Chance by Carly Phillips (The Kingston Family #3) 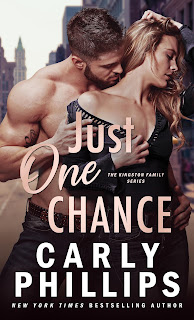 Note: An advance reader copy (ARC) was provided by the author via Wildfire Marketing Solutions.
Just One Chance is the third book in The Kingston Family from Carly Phillips. This is Xander Kingston's story, one he shares with his ex-girlfriend, Sasha Keaton. Xander is a former marine who has found solace in his successful career as an author. That success reaches a whole new level once Hollywood comes knocking on his door, and his books are adapted for the big screen. Having added "screenwriter" to his list of job titles, he never expected being in the industry to lead him to meet and fall in love with an up and coming starlet--Sasha. But then, she went and broke his heart, leading Xander to return to his close-knit family in New York. Years have passed, and Xander has another novel being made into a film. The lead actress, however, turns out to be none other than his ex, and Sasha's hoping to get him to help her better prepare for her role...and to get a second chance at being with him. He wants to keep his distance, but that's easier said than done.
This was another good addition to the Kingston Family series, although it isn't my favorite. It took a bit for me to feel connected to the main characters, especially Sasha. However, once I got over that hump, I did enjoy Xander and Sasha's story. Aside from the these trying to figure out how to move forward and see if their relationship is worth revisiting, there's a bit of suspense thrown into the mix courtesy of a stalker intent on Sasha. This leads to some close proximity between them, which leads to an opportunity to realize important things. Overall, Just One Chance was an entertaining four-starred read.
-------------------------
Read my reviews for the Kingston Family series: