Review: Just One Scandal by Carly Phillips (The Kingston Family #2) 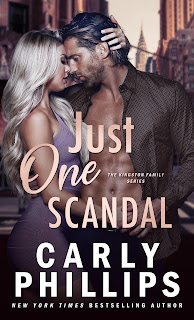 Note: An advanced reader copy (ARC) was provided by the author via Wildfire Marketing Solutions.
Just One Scandal is the second book in Carly Phillips's Kingston Family series, and it features Chloe Kingston, the twenty-five-year-old younger sister of Lincoln Kingston (Just One Night, The Kingston Family book one), and Beckett Daniels, who is thirty-two-year-old and Linc's former best friend turned business rival. Chloe has always been the good girl, the one who follows the rules and tries to keep her life as free of scandal as possible. When her groom-to-be decides to end things with her through a text message, Chloe is understandably upset, not just because she learns he's been cheating on her for months, but also because of the humiliation that comes with being a jilted bride. When Beck finds her a wee bit drunk, he decides to help her out by accompanying her to her bridal suite to sleep the alcohol off. The decision to offer her his spare bedroom since she sublet her apartment prior to her now-cancelled wedding may have been partly due to his wanting Linc to react, but with hot chemistry they share, can Beck leave his past to have a future with Chloe?
Chloe and Beck's story may have had that interesting element regarding the history between Beck and Linc, but I wouldn't necessarily consider the main characters as star-crossed lovers. If anything, I liked that Chloe had as strong of a backbone as she did. While she appreciated how protective her family was of her, she also knew how to stand on her feet and face down her battles. She did quite a bit of growing up here, and I think she needed someone like Beck to push and inspire her to go outside of her own box. Speaking of Beck, his back story was a heartrending one, and I understood why he was as committed to that bucket list of his as he was. While he may have known Chloe for years, I think the time was just right for him to connect with her as a partner and not just as his former best friend's younger sister. I enjoyed Just One Scandal and give it 4.5 stars.
-------------------------
Read my reviews for the Kingston Family series: