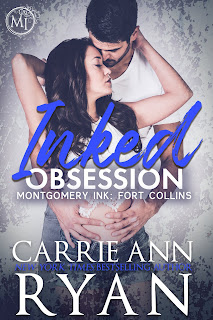 Note: An advanced reader copy (ARC) was provided by the author via Give Me Books Promotions.
Inked Obsession is the second book in Carrie Ann Ryan's Montgomery Ink: Fort Collins series, which is a part of the prolific Montgomery Ink book universe, and it's a moving story about getting a second chance at living and loving after loss and trauma. Beckett Montgomery is the eldest among his siblings, and he's familiar with the weight of responsibility. The last thing he needs is to act on his attraction to his sister's best friend. Not only is Eliza Wilder-Strong a part of their close-knit unit, it's also been less than a year since she lost her husband while he was deployed. They find themselves leaning on each other as painful revelations and secrets come to light, but when all is said and done, will their love be strong enough to withstand anything and everything else that'll come?
Ah, Carrie Ann Ryan certainly knows how to hit me in the feels. My heart went out to Eliza, especially as one particular secret is revealed. I seriously wanted to smack a few people, considering how callous information was presented to Eliza. But this woman wasn't going to allow herself to be steamrolled and I admired the backbone she had on her. Then there was Beckett, and the guy deserved a hug, what with the guilt that was eating at him. As always, Ryan knows how to have the spotlight focused on her main characters while also allowing the rest of the recurring cast of characters shine to a certain degree, coming off as memorable and supportive, but not scene-stealing. Inked Obsession easily gets five stars, and I am so looking forward to more from these siblings.
-------------------------
Read my reviews for the Montgomery Ink: Fort Collins series: