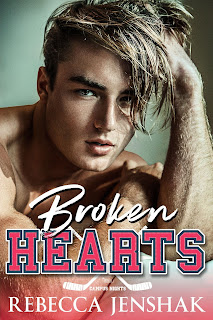 Note: An advanced reader copy (ARC) was provided by the author via Valentine PR.
Aaand I've just found my favorite book in the Campus Nights series! I've liked the first two, Secret Puck and Bad Crush, to bits, but this third one just took a piece of my heart. Broken Hearts is book three, and Rebecca Jenshak's penned a sweet romance featuring Rhett Rauthruss and Sienna Hale. He's a hockey player and she's a figure skater, and both are seniors who attend Valley U. Rhett ended his relationship with his high school sweetheart and childhood friend after six years together, so he isn't necessarily in a rush to commit to someone new just yet. When he finds himself sharing the rink with Sienna and then literally crashing into her soon thereafter, he can't seem to get her out of his mind. These two may not seem to have a whole lot in common, but there's a connection there begging to be explored. But can they have something that won't leave them broken?
I so loved getting to know Rhett and Sienna! They were just two student athletes who loved being on the ice but were now on the cusp of life beyond college and maybe even their respective sports. I appreciated that family was such an important part of their lives and that they each had a good circle of friends that they could lean on. I also need to give kudos to Rebecca Jenshak for the choices she made regarding where to take Rhett and Sienna's story, particularly when it came to someone from Rhett's past as well as Sienna's best friend, Elias. Speaking of that best friend, I REALLY hope we get his story, even if it's just a novella, but I certainly wouldn't say no to full-length novel! He was just such an important part of Sienna's life, and he had an interesting back story so... Fingers crossed! For now, I shall give Broken Hearts five stars, and I await the release of Maverick's book.
-------------------------
Read my reviews for the Campus Nights series: