Review: The Right Side of Wrong by Prescott Lane 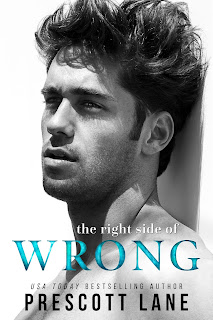 Note: An advanced reader copy (ARC) was provided by the author via Grey's Promotions.
Prescott Lane is an author whose work I've loved in the past, so naturally, I was looking forward to getting my greedy hands on her newest standalone. On paper, The Right Side of Wrong had the elements that should have guaranteed that I'd be all emotionally invested and stuck in my reading chair from start to finish. But you know the saying that the whole is greater than the sum of the parts? Unfortunately, that wasn't the case here. That's the thing with expectations made on seeing elements individually, but c'est la vie!
The Right Side of Wrong is the story of twenty-year-old Paige Hudson, a single parent with a five-month-old son named Finn, and thirty-year-old Slade Turner, millionaire business owner. When Slade first sees Paige, it's while she's on his father's arm at an event. Something about her had him not only offering to pay what she was owed and driven home, but also a regular job with his company. She doesn't know why he's doing it, but one thing Paige does know is that she's no Cinderella, but could Slade still be her prince?
I sooooo wanted to like this book more than I did, but it fell short of whatever expectations I had for it. The main characters came from very different backgrounds, but they shared a connection of sorts. There were secrets and lies on both sides but the revelations were somewhat anti-climactic, to be honest. There were things that didn't make sense, leading me to wonder if I'd missed anything, so I'd flip back and realize nope, it wasn't me. As much as it pains me, I can only give The Right Side of Wrong three stars.
Release Date: 29 July 2021
Date Read: 24 July 2021
Learn more about Prescott Lane.
Purchase The Right Side of Wrong on Amazon.