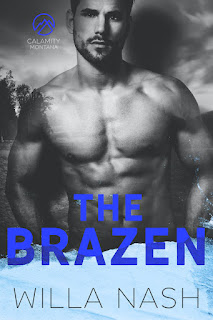 Note: An advanced reader copy (ARC) was provided by the author.
Willa Nash takes us back to Calamity Falls, Montana for the fourth novel in the series by the same name, The Brazen. If you're a fan of the series like me, then you'll remember Kerrigan Hale as being a notable supporting character who rents out several properties around Calamity Falls. The thirty-year-old is driven by her desire to make her business venture a success. When her mentor and main investor suddenly dies, the man's grandson becomes his heir, and thirty-one-year-old Pierce Sullivan has no interest in extending any sort of leniency when it comes to any and all of Kerrigan's debts. Try as she might, he refuses to listen to her pleas of understanding. Hoping to plead her case one last time, Kerrigan heads to her mentor's--now Pierce's-- lodge and a snowstorm leaves them stranded together. He's already got her future in his hands, and falling for him would be crazy. Doing so would give him the power to crush her dreams AND her heart.
Kerrigan and Pierce's story definitely put my heart through its paces. It was like being on a roller coaster and hanging on as our main characters tried to figure out what it was they truly wanted for themselves and each other. I loved Kerrigan's tenacity and her ability to make the most of whatever situation she found herself in. She had grand plans that were thrown to the wayside when the unthinkable happened. The death of Gabriel Barlowe, Pierce's maternal grandfather, became the impetus for these two strangers to meet, and while there was a whole lot of tension between them, it was clear that they had notable chemistry going on as well. Trust me when I tell you that there's A LOT more to this than it being a forced proximity romance. This was also a story about family, forgiveness, and moving forward after loss, and just loss as in passing away. Willa Nash has been bringing her A-game with this series, which is why The Brazen snags five stars.
-------------------------
Read my reviews for the Calamity, Montana series: