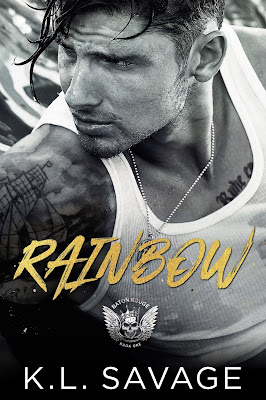 Rainbow
(Ruthless Kings MC: Baton Rogue #1)
by K.L. Savage
Release Date: July 20, 2021
About Rainbow
Fire is the reason why my life changed.
And I’m the reason why fire doesn’t stand a chance.
I’m a smokejumper.
I save those who can’t be saved.
But somewhere along the way, smoke has blinded me.
I’ve forgotten there is more to life than saving lives, but I can’t press pause.
A category five hurricane heading straight toward us changes everything I ever thought I knew about myself.
For instance, Ryan Hathaway.
Paramedic from Vegas. Sexier than sin. Sassy.
A man.
I’ve never wanted a man.
But I want him.
And he makes me feel the hottest I’ve ever felt.
Fire can’t even compare to him.
Only thing is, he doesn’t do straight guys. It’s his rule.
What I love about rules is that they are made to be broken.
And I’m going to make him rewrite everything he thought he knew.
Nothing is ever black and white, though.
It’s the details that live in the shades of grey that we need to watch out for.
The hurricane dislodges one of my MC brother's hate and hits us harder than the storm does.
Wind. Rain. Blood. Death.
The storm is far from over and our lives are at stake.
I live my life to the fullest and I won’t die with regrets.
Ryan is the blaze I never want to fight.
If we go down, we will burn together.
Extinguishing us is not an option.
Because after a storm, there’s always a rainbow.
I’ll be damned if I don’t finally see what’s at the end. 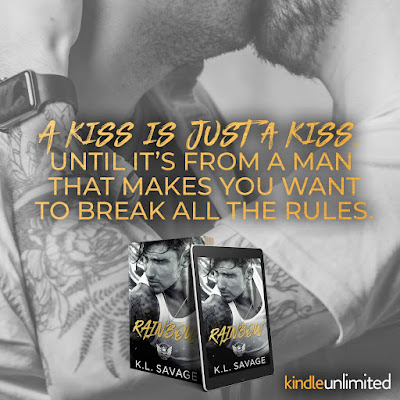 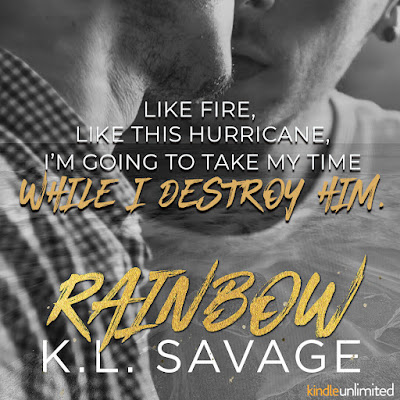 An Excerpt from Rainbow
How the hell do I get myself in these situations? Out of all the jobs as a paramedic, I find myself constantly in front of biker gangs more than regular patients. I mean, I leave Vegas and come to Baton Rouge to do a favor for my boss and end up in Ruthless Kings territory, again? Do they multiply when I blink or something?
Should have told my boss that I wouldn’t swing by his old stomping ground to help cover a staffing shortage his friend was experiencing. It seemed convenient. Stay in Baton Rouge until the storm passes, then head down to the coast where they’ll need me most.
Now I’m here, and I can’t tell if the biker looking at me wants to eat me, fuck me, or kill me.
“For a little guy, you sure know your way around bone,” Butcher grunts.
“For a guy named Butcher, you sure do complain a lot.” I press the fresh bandage against his thigh, maybe a little harder than necessary, and he growls at me.
I always liked riling up a guy bigger than me. I don’t know why. I know I don’t have a death wish, but it’s fun, and usually, bigger guys won’t pick on me. I’m sure my luck will run out soon, but until then, I’m going to poke every single bear.
And giggle as I run away.
“Okay. I’ll just say it was an accident and that no one got shot, or we’d have to report it to the police, and I don’t feel like staying here longer than necessary. Not that your hospitality isn’t… wonderful,” I add, only to sound more like a jerk.
The big guy, the one that wears the patch that says Prez, laughs as he strokes his chin with his fingers. “You’re welcome back anytime, Ryan. We appreciate your willingness to… cooperate.” He reaches into his cut pocket—I learned they weren’t vests after being corrected a few years ago—and pulls out a stack of money.
Here’s the thing about bricks of cash like this: it’s most likely illegal money. Maybe it’s drug money or blood money, but honestly? I don’t really care. I have student loan debt to pay.
I pluck the cash out of his hand and tuck it into my paramedic bag. “It’s been a pleasure doing business with you.” I give them a mock salute and swallow down my nerves as I wade through the very large bodies covered in leather.
Now that I’m looking at them, I can’t help but wonder if they’re going to let me leave. Maybe I’ll get lucky. Perhaps they’ll want to take turns with my body and ravish me. I might be a smart man, but I’m still a man, and somehow these bikers get better looking with each state I end up in.
Ah, a man can dream, can’t he?
Lye, according to his patch on his vest—I mean, cut—opens the door for me.
Once I’m outside, I take a deep breath and don’t bother looking back. Of course, the quicker I get out of here, the better.
“Hey!”
A deep voice with a twangy edge has me freezing mid-step next to the rig, and I try not to panic. Did one of the guys see me check them out? I didn’t. I think I kept my eyes to myself. I thrust my shoulders back and open the doors to the rig to toss the medical bag inside. I close the left side and see the most handsome man I’ve seen in my entire life. I suck in a breath—no—he stole my ability to breathe, looking as good as he does. 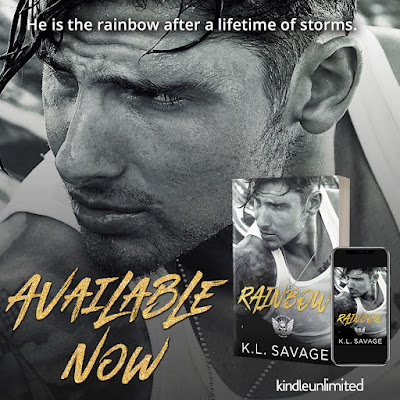 K.L. Savage decided they were tired of looking for the kind of books they wanted to read. They had an itch that needed to be scratched, and as every girl knows, nothing scratches better than an alpha.
They write about gritty, alpha males, sometimes their dark sides, and the women they love. If you have the same itch, their alpha males should fix that.
Connect with K.L. Savage
Website | Facebook | Facebook Group | Twitter | Instagram | Goodreads | BookBub | Amazon | Newsletter 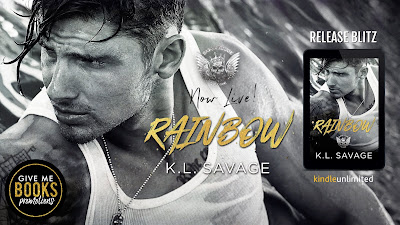