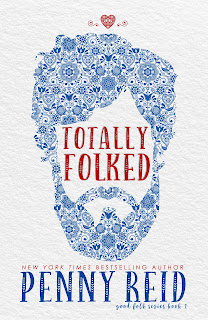 Note: An advanced reader copy (ARC) was provided by the author via Give Me Books Promotions.
It's been quite a while since I last read something penned by Penny Reid, so when I found out that she had a new series in the offing, I felt this would be the perfect opportunity to dive back into her writing. With the prequel novella, Just Folking Around, whetting my appetite for more quite nicely, I had high expectations for Totally Folked, the first full-length novel in Reid's new Good Folk: Modern Folktales series. Now, if you've yet to pick up the prequel novella--which is currently free on e-retailers, FYI--no worries because it's included in the released full-length series starter, so you won't be missing out on any of it.
Totally Folked is the story of Jackson James and Raquel Ezra. When they first met, he was a sheriff's deputy for Green Valley, Tennessee and she was an up and coming actress from Los Angeles, California. They shared one unforgettable night together--no strings, no promises--and went on to lead separate lives. Five years later, Jackson is now the sheriff of Green Valley while Rae is an in-demand actress. With all the success she's achieved, you'd think Rae wants for nothing, yet she can't help but feel that something is missing. When she decides to return to Green Valley, her path crosses with Jackson's once again, but will this be nothing more than a fling or could this turn out to be something lasting?
I quite enjoyed this opening salvo in the Good Folk: Modern Folktales series. I know some readers have commented that Jackson was someone they didn't hold a high regard for in Penny Reid's Winston Brothers series, but since I'm not all that familiar with said books, I went into this without having zero knowledge of the guy and he turned out to be rather endearing. Rae was a female main character who was easily likable. Getting to know her and Jackson and seeing their relationship flourish was fun. Four stars go to Totally Folked.
Release Date: 20 July 2021
Date Read: 20 July 2021
Learn more about Penny Reid.
Purchase Totally Folked on Amazon | Apple Books | B&N | Kobo.