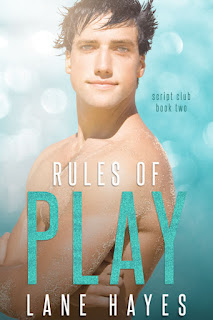 Note: An advanced reader copy (ARC) was provided by the author via IndiGo Marketing & Design.
If it's one thing Lane Hayes has made her niche, it's the bi-awakening trope in the M/M romance sub-genre. Where here earlier work had a heavier, more angsty feel to it, her newer sets of series are lighter in tone. Her books are addictive either way, what with Hayes's ability to create memorable characters that readers wouldn't mind knowing in real life. Her newest series, Script Club, consists of a group of nerdy friends, and for the second book, the spotlight is turned towards George Murphy and Aiden Baker. George is twenty-four and a cape-wearing, book-loving, spooktacular genius in his last year of grad school, and Aiden is twenty-seven, a mechanic, and at his best when talking about baseball. When George is coerced by his boss to help him make a girl fall in love with him, he turns to Aiden, who may not know anything about love, but he knows a thing or two about liking his best friend's younger brother. But that's against the rules... Or is it?
Rules of Play was a pretty quick read, but it doesn't feel overly rushed nor does it come off as skipping over certain points of the story. Both George and Aiden were good main characters, opposites who come together and prove that you don't have to be similar in every single aspect in order to fall in love and have a relationship. The story pretty much plays out the way I expected it to. It was lighthearted without a whole lot of drama, and the happily-ever-after is, naturally, guaranteed. I do wish that the book were a wee bit longer, mainly because it would have been nice to delve into the deeper aspects of George and Aiden's relationship. The author's older books tended to be lengthier, but I do want to point out that even though the books have been shorter the past couple or so years, Lane Hayes doesn't skimp on character or story development or the feels, all of which are essential in romance. All in all, Rules of Play was a wholly enjoyable, four-starred read.
Date Read: 23 July 2021
Learn more about Lane Hayes.
Purchase Rules of Play on Amazon.