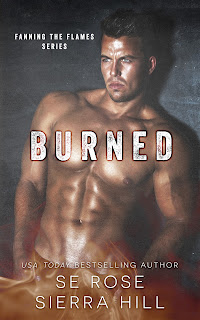 Note: An advanced reader copy (ARC) was provided by the authors via Wildfire Marketing Solutions.
Authors SE Rose and Sierra Hill have joined writing forces and have just released the first book in the Fanning the Flames series. I've read Rose's and Hill's works as individual authors, so I was curious to see the efforts of their pairing up. Burned is a work place romance with a hint of second-chance romance to it. Callie Bartholomew's dream has been to be the best firefighter she can be, knowing she carries the legacy of her father and brothers with her. The move to Rivers Crossing came with it the promotion of a lifetime: the first female to ever become fire chief. She knew the move would mean being away from her family, but it was a necessary sacrifice on her part. What she didn't know, however, was that one of the firefighters at her new station is a familiar face--Tyler Holmes, a man she met and slept with a decade ago. The same man who still wants...her.
Well, this turned out to be as hot of a read as it promised to be! I liked Callie and Tyler, and I felt that the connection they shared was not only believable but was the kind that wasn't limited to "fling" (aka temporary) status. The added dimension of Callie being Tyler's superior was what made this interesting, stirring up a whole lot of tension between them. But the best thing about this had to be the surprise element of angst, making for a more emotional read than I was expecting. Aside from the romance, I think the added story angle of a woman being the highest ranking member at the fire station was one that I highly appreciated and it was handled quite well. As far as SE Rose and Sierra Hill working together on Burned, I do think that their writing matched up rather nicely, and I look forward to reading more from the Fanning the Flames series. Four stars.
Release Date: 28 July 2021
Date Read: 25 July 2021
Learn more about SE Rose and Sierra Hill.
Purchase Burned on Amazon.