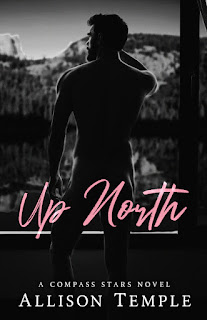 Note: An advanced reader copy (ARC) was provided by the author via Neon Rainbow ARC Reviews.
Gah! I adored this series starter! Up North by Allison Temple is the first novel in the Compass Stars series, and it's now my favorite read from this author. Readers are introduced to Damian Marshall and Jack Spencer, the former being one of the most in-demand leading men in the film industry and the latter being a fisherman currently employed as a fishing guide for an high-end resort in Alaska. When rumors become too much for Damian--to the point that his future movie projects are in jeopardy--his agent insists he lay low, sending him off to The Wild Eagle Lodge--away from paparazzi and gossipmongers in California. It's also the same place where Jack meets David, bodyguard for the resort's VI-VIP, a certain Mr. Morgan. Over a handful of days Jack falls for David, and vice-versa. Except David is Mr. Morgan--David Morgan. And David Morgan? Well, he just happens to be none other than Damian Marshall--the very same one still in the closet.
In a world where some romance books tend to be formulaic, I love it when an author goes out of their way to stand out. which is exactly what Allison Temple has done with this new novel of hers. Yes, the whole celebrity romance is nothing new, and it can be hit-or-miss, depending on what new twist or creative touch an author can bring. With the plethora of books that I've read in all my years on this planet, I can't honestly tell you if I've read a romance where the celebrity isn't the least bit familiar to the other main character. Yet there was something fresh about Temple's take on this trope. I loved David (aka Damian) and Jack together, and they were such interesting individuals to boot. There was a bit of deception when it came to David not coming clean as to who he really was, but I appreciated how that was resolved and how he made amends to Jack. Up North also had a strong cast of supporting characters, and I hope we get Vin's book next! Five stars!
Release Date: 26 July 2021
Date Read: 18 July 2021
Learn more about Allison Temple.
Pre-order Up North on Amazon.