Review: Scoring with Him by Lauren Blakely (Men of Summer #1) 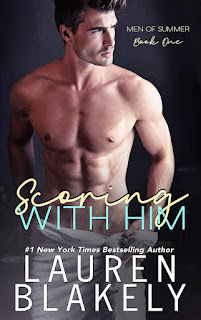 "You are so damn irresistible."

"Don't resist me." My voice barely sounds like my own, yet it's the truest statement I've ever breathed.

When one of my friends told me that I would FLOVE this book, I knew I was going to be in for one heck of a ride with Grant Blackwood and Declan Steele. I trusted my friend's judgment, and boy, oh boy, was she oh-so-damn-right! Scoring with Him is Lauren Blakely's third full-length M/M romance novel--but fifth overall if you include two novellas, including the prequel for the Men of Summer series--and this book is undoubtedly some of her best work. That's saying something considering how prolific of a storyteller this author is and how many of her books I've simply fallen madly in love with. This book also happens to be part of Blakely's Rules of Love series and shares ties with her Guys Who Got Away series as well. That being said, you don't necessarily need to read either of those...but hey, if you're looking for fab romantic comedies, go read them!
While readers get a bit of an introduction to our main characters, especially Grant Blackwood, in Crushing on Him--which is currently free on e-retailers, FYI--Scoring with Him is where Grant and his crush and new teammate, Declan Steele, have their story TOGETHER play out. Grant is the rookie catcher of the San Francisco Cougars, while Declan is in his fifth year as the team's shortstop. Both are openly gay, and both are dedicated to the sport they both love. Neither one is looking for a distraction, but they're both nursing crushes on each other, albeit Grant's been crushing on Deck for a tad longer. Maybe if they agree on acting on the attraction but with an end date and remain friends throughout, they'll be able to get it out of the way. That is, as long as they don't fall in love.
Where do I even begin with this book?! It's this beautiful amalgamation of sweet, steamy, saucy, and scintillating. Grant and Declan, aka Rookie and Deck, had this undeniable connection from the get-go, and it felt like such a privilege to see them go from teammates to workout buddies then friends before becoming lovers. They have rich personal histories that make them interesting, and their dedication to baseball and adoration for each other, as well as their friendships and familial relationships, make them endearing. There were obviously challenges in pursuing a committed relationship, both romantic and sexual, and with this ending on a cliffhanger, things remain unsettled.
Experience has taught me to be wary when authors who have made a name for themselves writing cis romance add LGBTQIA+ romance to their repertoire. More often than not, it's felt forced, almost as if the story leaned more towards having straight characters than queer ones. But with each M/M romance Lauren Blakely has released, I can't help but feel as if my faith in her and her writing is being rewarded. She's one of the rarefied few on my author go-to list that has struck a fine balance among the romance sub-genres she's taken on, and I'm here for all of it. Five-plus stars go to Scoring with Him.
Release Date: 09 July 2021
Date Read: 07 July 2021
Learn more about Lauren Blakely.
Purchase Scoring with Him on Amazon | Apple Books | B&N | Kobo.