Review: Out of Bounds by Claire Hastings (Atlanta Rising FC #1) 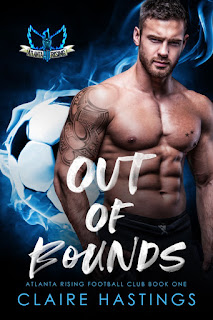 Note: An advanced reader copy (ARC) was provided by the author via Elle Woods PR.
Claire Hastings is a new-to-me author, and her Atlanta Rising FC series starter is my introduction to her writing. Out of Bounds is an enemies-to-lovers romance featuring the Atlanta Rising Football Club's head coach, Gunnar Gracin, and Felicity Sutherland, the Director of Team Services. He's in his forties (probably about forty-three, but don't hold me to that because I was basing it off some of the numbers mentioned in the book and my math is kinda meh) and she's thirty-one. Being named head coach and confirming that he's the father of a twenty-two-year-old daughter are new responsibilities weighing on him, and Felicity doesn't make it easy to work with her. She's rather cold and no matter how hard she tries to come off as nice, her demeanor doesn't seem to thaw. But time spent together bridges the gap, enough for the two to cross a line... but at what cost?
For years, I'd convinced myself that I had no personal preference when it came to the point/s-of-view (POV) a book was written in. Welp, I think having A LOT of time reading during the pandemic has made realize that I do have a preference, and it isn't third-person POVs. Case in point is Out of Bounds. The third-person POV made me feel detached from the characters, which in turn made it difficult for me to be wholly invested in them.
Then there was the fact that this book in particular (not sure if it's the series as a whole) shares ties with a previous series penned by the author. Felicity makes mention of "Tripp" and I had no clue who that was even though it felt like I was supposed to. Turns out it was a nickname for her younger brother, who was part of the other series, and I'm guessing that it was mentioned there. I mean, I could be wrong, but I had to flip back and then search through the pages I'd already read if I'd missed him. Tripp tripped me up. Hahaha!
I confess that it took what felt like forever before I warmed up to the frosty Felicity. I get; experience has taught her to be the person she was. Still, a little loosening up and some warmth wouldn't have killed her. There may have even been a time or ten where I felt Gunnar should have been with someone better. Speaking of Gunnar, the man deserves some sort of award for doing as well as he did juggling everything he had going on in his life. So, taking it all into consideration, Out of Bounds was still an okay three-starred read.
Release Date: 12 July 2021
Date Read: 10 July 2021
Learn more about Claire Hastings.
Purchase Out of Bounds on Amazon | Apple Books | B&N | Kobo.