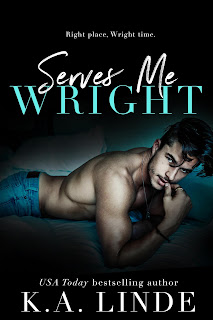 Note: An advanced reader copy (ARC) was provided by the author via Wildfire Marketing Solutions.
Serves Me Wright is the ninth book in the Wrights series from K.A. Linde, and this time around, we have Julian Wright's story. In need of a date to a charity event, Julian turns to Jennifer Gibson, a photographer and his brother's girlfriend's best friend. She'd be perfect as his fake date, and in return, he'd be her fake date to her brother's graduation celebration. While these dates may all be fake, these two have a real friendship, as well as an all-too real attraction to one another, something that neither has bothered to openly acknowledge or chosen to pursue. When they end up sharing one bed, however, the pull to each other can no longer be denied. But when everything's been said and done, will their fake date arrangement come to an end and it all goes back to the way it was between them, or could this be a chance for them to finally become something more real?
The Wright clan continues to be both entertaining and endearing, which is why I'm glad that K.A. Linde made the decision to keep those stories coming. I relished the opportunity to get to know Julian better, and it turns out that he's definitely as interesting as I deemed him to be. I liked how he was with Jennifer, and I honestly understood where he was coming from when it came to his estranged father. When it came to Jennifer, not only did I think she had the awesomest name (grin), but I easily empathized with the struggles she had when it came to her family. When these two main characters made the choice to pursue an honest-to-goodness relationship, I could see them coming into their own and becoming better versions of themselves. A bonus, of course, was being able to catch up with all the paired-up couples from the series. I'm awarding Serves Me Wright four stars.
Date Read: 21 July 2021
Learn more about K.A. Linde.
Purchase Serves Me Wright on Amazon | Apple Books | B&N | Kobo.