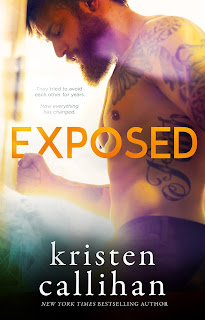 "I'm good, Bren. I'll do whatever you want, for as long as you want. I'll make certain you're taken care of, and I won't tell a soul."

I've been waiting for what feels like forever for this book! Okay, more like a couple of years and some change, but you know when you're fully invested in a series, and then you're itching to get that next book but it takes a wee bit longer than you thought it would? That's how it was with the fourth novel in the VIP rock star romance series, but Kristen Callihan has rewarded fans and readers with a story that's worthy of the main characters. Exposed is a standalone, as are the first three novels, but if you're like me and you have a thing for reading books in a series in order, I happily recommend you do so!
It's no secret that Brenna James can't stand being around Ryland Peterson. If it weren't for the fact that the twenty-eight-year-old was Kill John's publicist and that the thirty-year-old bassist had to work together and happened to share the same close-knit circle of friends that was more family than anything else, Brenna would avoid Rye as much as she could. His being as gorgeous as he is doesn't negate the fact that he rubs her the wrong way. When he overhears something she tells her best friend in confidence, she expects him to hold it over her head. Instead, he makes her an deliciously indecent proposal. It's meant to be nothing more than sex between them, but what Brenna doesn't know is that her agreement to their arrangement offers Rye the one thing he's always hoped for--her.
Goodness, but how I loved Rye and Brenna and their story! There was sex, romance, wit, and angst, and I was there for all of it. This series is undoubtedly my favorite from Kristen Callihan--but her Game On series is nothing to scoff at, and it sits nicely as a close second--and I'm rather attached to the guys of Kill John and their inner circle. That thrum of awareness and tension happening between the main characters was part of what made their pairing work. Who doesn't love a couple that has undeniable chemistry, right? These two certainly had their issues as well, and while their happily-ever-after was a long time coming, it was destined to be a hard fought one as well. Five-plus stars for Exposed!
Release Date: 13 July 2021
Date Read: 11 July 2021
Learn more about Kristen Callihan.
Purchase Exposed on Amazon | Apple Books | B&N | Kobo.