Review: Things I Wanted to Say (But Never Did) by Monica Murphy 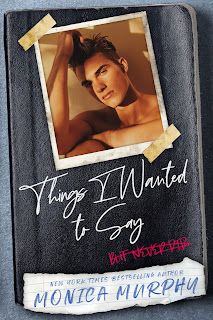 Note: An advanced reader copy (ARC) was provided by the author via Valentine PR.
I confess that the past couple of years have seen me weaning myself off bully romances. Yes, I still read one or two every so often, but it got to that point some time ago that too much of a "good" thing isn't really all that good. There was only so much bullying and belittling I could take, particularly when the female main character is overly submissive. Now, like I said, this particular trope hasn't been completely wiped off my list of romance tropes, but it takes an enticing blurb for me to even consider it. Matched with an author whose work I've loved in the past is a bonus, which is why when I learned Monica Murphy newest standalone was going to be a bully romance, I checked out the blurb and went for it. I'm glad I did because Things I Wanted to Say (But Never Did) was a great read.
Whittaker Augustus Lancaster is a young man who knows his place, and he has no problem lording it over anyone he comes across, particularly in Lancaster Prep. Whit is cold, callous, and calculating and is as much feared as he is revered by everyone around him. His words and actions cut to the bone. Just ask Summer Savage. They met at fourteen, but it was during senior year that Whit made sure he would remind Summer of the power he held in his hands. With the help of her journal--the very same one he stole--he would ensure to not merely make her bow down to his every whim, but to break her.
As is usually the case when it comes to bully romances, they're not the hearts-and-flowers type of story, although there are some that turn out that way later on. In the case of Whit and Summer's romance, well, it is every bit as dark and gritty as I expected it to be. Whit was mean, although to be honest, I don't think that description fits him enough. Yes, he had his reasons for his behavior and his treatment of Summer, but that's not excusing anything he did. Through it all, the change in their relationship held my attention and kept me fascinated. They had undeniable chemistry, and they did, indeed, fit together. This has some of Monica Murphy's best writing, though if I had to pinpoint why I'm not giving it a higher rating, it would have to be the twist in the story one you can see coming, and the book was a wee bit too long. All things considered, if you love a well-written bully romance, you cannot go wrong with four-starred Things I Wanted to Say (But Never Did).
Release Date: 29 July 2021
Date Read: 24 July 2021
Learn more about Monica Murphy.
Purchase Things I Wanted to Say (But Never Did) on Amazon.