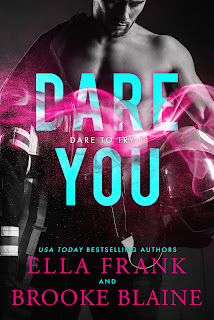 Note: An advanced reader copy (ARC) was provided by the authors.
When Brooke Blaine made the announcement that the story that fans and readers had been waiting for was finally coming fruition, there was a twist to it. Of course, there was! And it was the best kind, because not only would Sebastian Vogel be getting one book--he was getting three! Aaaaand...he was paired with the last Bailey standing, Kieran! Yes, we're talking about Ella Frank's Baileys, and since the oldest and youngest brothers found their happily-ever-after, it was high time for the middle child to hope to it. Well, that is if he dared to try. Oh, by the way, the title of this Bash and Kieran trilogy? Dare to Try. See what I did there earlier? So, this is like a crossover series of Blaine's South Haven and Frank's Confessions and Prime Time series, both of which are part of her Chicagoverse book world. All that being said, this new series starter can be a standalone.
Dare You is the first book in the Dare to Try trilogy and it finds tech mogul and multi-millionaire Sebastian Vogel hundreds of miles away from his home in South Haven, Georgia. He's in Chicago, Illinois looking to expand AnaVoge, when a fire in his penthouse brings in the city's first responders and soon, he's being rescued like a damsel in distress by a hot firefighter. His red sequined gown and heels may have caused his rescuer to assume he was female, but Lieutenant Kieran Bailey pretty much learns Miss Razzle Dazzle is actually a mister--one that Kieran finds himself rather fascinated with. Bash is out and proud and makes no apologies for it, and Kieran is straight. Always has been, always will be. They're two very different people from two very different worlds. But they quickly forge a friendship--one that could become more if they dared to give it a try.
Ah, Bash and Kieran. Kieran and Bash. When Kieran was mentioned as being Bash's counterpart in this series, there was as much surprise as there was expectation. The former because Kieran was basically straight throughout the stories of his two brothers, and the latter because anyone can be straight until they encounter someone who knocks their world off its axis and makes them realize that maybe they're not as straight as they once thought they were. Lust and love can do that, and since we're just into the beginning of Bash and Kieran's story, it's more lust than love...for now. And because this is a trilogy with a continuing story line, it shouldn't be that much of a shocker that this first book ends in a cliffhanger--one that had my heart in my throat. But that's all you're getting out of me. No spoilers! And the countdown begins to August 30th! Five stars go to Dare You.
Release Date: 30 July 2021
Date Read: 24 June 2021
Learn more about Ella Frank and Brooke Blaine.
Pre-order Dare You on Amazon.