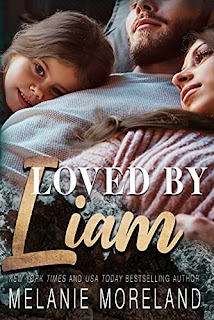 Note: An advanced reader copy (ARC) was provided by the author.
I went into Loved by Liam thinking it was going to be a novella, but was happily surprised it turned out to be a full-length novel instead! This is the third book in Melanie Moreland's Vested Interest: ABC Corp series, and while readers pretty much know that the main characters, Liam Callaghan and Paige Winters, fell fast and hard in Finding Ronan's Heart (book two in the Vested Interest: ABC Corp series), seeing their story unfold from their respective points of view gave me an even greater appreciation for it. While theirs is a story all their own, there are spoilers for anyone who has yet to read the previous books in the series, especially the second one since it's most tightly connected to this one.
Liam Callaghan was thirty-three and focused on his successful landscaping company. Falling in love was certainly nowhere on his radar; that is, until he met his younger brother's girlfriend's best friend. Paige Winters was beautiful and fascinating. Others may have thought her being a single mother to a daughter named Lucy would have been a hindrance, but Liam fell for the little girl as much as he did the girl's mother. But Paige is hesitant, knowing full well she wouldn't only be putting her own heart but that of Lucy's on the line if she indulges her feelings. But Liam's going all in with both of his girls.
This book gave me major le sigh feels. I'd call Liam a unicorn of a male main character, but then it seems like all the guys in the Vested Interest: ABC Corp series are a team of unicorns. Or maybe it's because Liam is such a breath of fresh air compared to all the overly alpha guys who think grunting and being domineering makes them hot. I loved how he was with Paige AND Lucy. Speaking of Paige, I loved her as well. She had an independent spirit to her, but she also loved beyond measure when it came to those who lay a claim to her battered but resilient heart. I'm so glad Melanie Moreland followed her own heart and gave them the expanded story they deserved. Five stars for Loved by Liam.
--------------------------
Read my reviews for the Vested Interest: ABC Corp series: