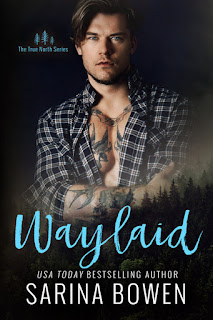 Note: An advanced reader copy (ARC) was provided by the author.
I so love being in this world that Sarina Bowen has created in her True North series. The Shipleys have become one of my all-time favorite fictional families, and the latest one to get their story is Daphne Shipley, the last one within her immediate family to still be single. For fans and readers of the series, you'll remember that Daphne is Dylan's twin and she's the youngest among the siblings--Griffin, May, Dylan, and Daphne. she was the one who wanted to get away from her home state of Vermont, going to Harkness College in Connecticut. She's now returned, transferring from Harkness to Burlington University (aka Moo U) for her final year. And who is she paired with? Richard Ralls, who prefers to be called Rickie--the same Rickie who happens to be Dylan's best friend working on their family farm for the summer. Yes, the same summer that Daphne finds herself back home.
Waylaid can pretty much be read as a standalone, although if you've yet to read the previous True North books, there may be bits and pieces that could turn out to be spoiler-like. Having said that, you'll still be able to fully understand what happens with Daphne  Shipley and Rickie Ralls and enjoy their story on its own. Speaking of their story, going into this blind wouldn't be a bad idea. If you need the barest of basics, then let's leave it at Daphne and Rickie meeting for the first time nearly three years prior, and now, they're both living on and working at the Shipley Farm. He's now twenty-two, and she's almost twenty. Oh, and Rickie has no memory of them meeting and spending six hours together. Got your attention? Suffice it to say, this book was absolutely both intriguing and enticing.
This book caught me off-guard, with Sarina Bowen coming up with a unique story befitting of these main characters. Rickie was a breath of fresh air but he was also a conundrum. We get to see the Rickie that he was before through flashbacks--and same goes for Daphne--but its the present version that mystified me and I quite enjoyed getting to know him and what made him tick. As for Daphne, she truly came into her own, and while she had hard acts to follow, what with the her siblings and cousins being the standouts that they are, her growth as a character was just as mesmerizing. I loved how Rickie and Daphne were as a couple, and their story was fascinating. I don't want to give anything away, but suffice it to say that while there were parts that I saw coming, I was still left gobsmacked by how it all came together. Gah! So good! Five stars go to Waylaid.
--------------------------
Read my reviews for the True North series: