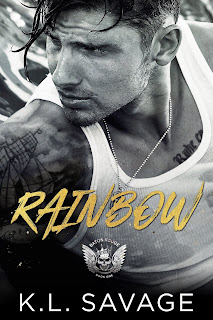 Note: An advanced reader copy (ARC) was provided by the author via Give Me Books Promotions.
I've noticed K.L. Savage on quite a number of Give Me Books Promotions sign-ups over the past few months, but I've hesitated because the events were for an on-going series, and experience has taught me that jumping into the middle of that can get messy. When I saw the sign-up for Rainbow, though, I realized that the perfect opportunity had finally come along! Not only is this the first in a spin-off series, but it was an M/M romance, which is a personal favorite. Ruthless Kings MC: Baton Rouge is an MC romance spin-off of the original Ruthless Kings MC series, but not having read the latter, I can confidently say you can dive in and still enjoy this new series even if you've yet to read the other one.
Rainbow takes readers to Louisiana and introduces them to the Baton Rouge Chapter of the Ruthless Kings motorcycle club. This series starter is about the club's VP, Nathan Rainbow Kennedy, who is also a smokejumper. He's got a job he's dedicated to, a club that feels more like family, and a younger brother he would die for, but when he meets Ryan Hathaway, Rainbow realizes what he's been missing. He's never wanted another man before, but the paramedic from Vegas isn't just any man. Exploring their connection is something they'll fight for, but can they withstand Mother Nature and unknown danger?
This was a good first read from K.L. Savage, and I get why many readers are as addicted to their books as they are. Rainbow was an entertaining bi-awakening story with a hint of mystery to it. The romance had insta-love vibes to it, and everything progresses rather quickly, not just between the main characters, but with every single event that hits them and the club. Figuring out who was behind the threats and violence wasn't too difficult, but that didn't take away from the overall enjoyment of reading the book. There are also quite a few notable supporting characters who snagged my attention, so I'm looking forward to checking the rest of the series going forward. I'm handing Rainbow four stars.
Release Date: 20 July 2021
Date Read: 18 July 2021
Learn more about K.L. Savage.
Pre-order Rainbow on Amazon.