Review: The Rookie by Kendall Ryan (Looking to Score #3) 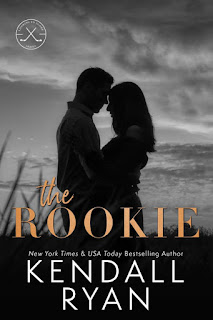 Note: An advanced reader copy (ARC) was provided by the author.
The Rookie is the third novel in the Looking to Score hockey romance series from Kendall Ryan, and I do believe I've found my favorite in said series (so far). This is Logan Tate's story, Logan being the hotshot rookie on the team, but as talented as he may be when it comes handling a puck, he's scrambling to keep it together before losing it all. He's been getting more attention for the trouble he gets into rather than his numbers on the ice. An ultimatum requires him to get help--the sooner, the better--but he's resistant. However,  his sports psychologist, Summer Campbell, isn't about to quit on him, choosing to follow him to his family's property where he's decided to hide out at. With her setting up shop right where he's at, there's nowhere for Logan to go. That means, though, that Summer can't hide from the attraction she feels for him. But falling for a patient is a no-go for someone in her profession. Doing so may cost her her career. With so much on the line for them, Summer can't afford to cross the line--no matter how much she falls for Logan and his family.
This third Looking to Score is more about the romance than the sport itself, with just a sprinkling of hockey thrown in to remind us what sport Logan plays. I was hoping for a wee bit more hockey than what was in the book, especially when it came to Logan's interactions with his teammates, but I still enjoyed the story as a whole. Logan has his reasons for lashing out as much as he did, and it doesn't really take a whole lot of figuring out what triggered the change in him, but he did need to get it all out because it was affecting him negatively. Summer was exactly who he needed, both personally and professionally, and I liked seeing their relationship develop and blossom as they spent more and more time together. Theirs was a slow-burn romance, and I had a better appreciation for what they had as a couple. I know there's at least one more book in the series, but I've got my fingers crossed that the author has plans for Logan's siblings in the future. For now, though, I'll be giving 4.5 stars to The Rookie and will be counting down to the release of the fourth book.
-------------------------
Read my reviews for the Looking to Score series: