Review: The Rebel by Kendall Ryan (Looking to Score #1) 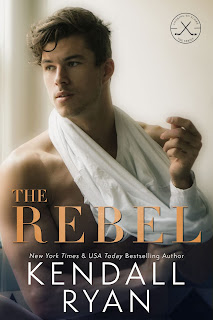 Note: An advanced reader copy (ARC) was provided by the author.
Kendall Ryan's got a new series, and boy, has she gotten it off to a fabulous start! The Rebel is the first book in Ryan's Looking to Score series, and it's got second-chance feels. When Eden Wynn and Holt Rossi were in college, they shared one unforgettable night, and then went their separate ways. Six years later, Holt is thrilled that his security firm has landed a prime job contract with the Boston Titans, a professional hockey team. The last person he expects to cross paths with is the woman who left an indelible mark on him--Eden. Many things have changed over the years, but two things remain the same: the chemistry and connection Holt shares with Eden, and the fact that he can't guarantee her the type of happily-ever-after she deserves. Yet he doesn't want to squander the second chance that Fate has thrown their way, and this time around, Holt doesn't want to just lay claim over Eden's body--he wants her heart, even as she refuses to give it to him.
Series starters are important in my eyes because they tend to set the pace, as well as the bar, for everything else to follow, even if every single book is a standalone. One of the best things about Kendall Ryan's new series starter is that I thoroughly enjoyed the main characters, Eden and Holt, while also leaving you eager for whatever else is to come as the rest of the Looking to Score books start rolling in. Both Eden and Holt had this notable relationship, but they were also intriguing as separate individuals, allowing me to get to know them better while also having me excited to see how they would evolve as a couple. From beginning to end, The Rebel kept me very much entertained. I'm giving it 4.5 stars.
Release Date: 30 March 2021
Date Read: 29 March 2021
Learn more about Kendall Ryan.
Pre-order The Rebel on Amazon | Apple Books | B&N | Kobo.