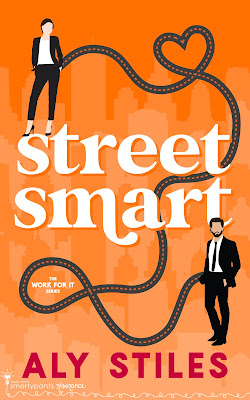 Street Smart
(Work for It #1)
by Aly Stiles
Date Released: March 4, 2021
Smartypants Romance
About Street Smart
What could go wrong—four words MBA student Marcos Oliveira ignored when he accepted a prestigious internship at Reedweather Media, a subsidiary of the legendary Sandeke Telecom empire.
What did go wrong? Everything.
And when Marcos stumbles upon incriminating documents that signal corporate espionage against Sandeke’s son Martin, he suspects his strange intern wormhole has just exploded into chaos. When his alluring boss Eva draws him in to thwart the plot, he knows it.
After spending their lives overcoming adversity, can Marcos and Eva handle this latest threat? Even more perilous might be their losing battle against forbidden attraction.
His Ivy League education didn’t prepare him for spy games and illicit flames. Good thing he has the street smarts to work for it.
Street Smart is a full-length workplace romantic comedy and can be read as a standalone. Book #1 in the Work for It series, Educated Romance World, Penny Reid Book Universe. 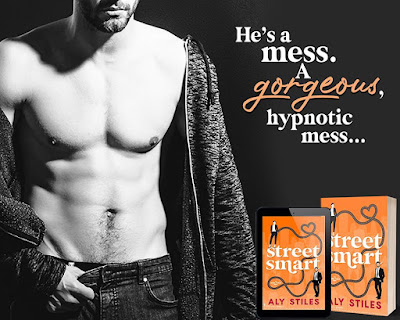 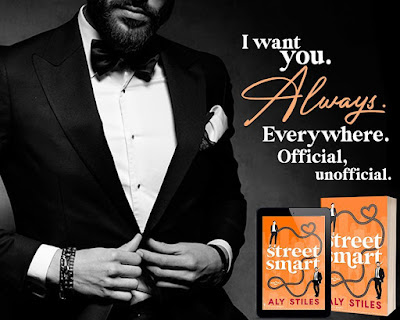 An Excerpt from Street Smart
We straighten in alarm at the click of the lock on the main door. Crap! On instinct, I yank his shirt to pull him to the far end of the closet-like room and shove him behind one of the giant racks. Here’s to hoping whoever this person is doesn’t need to access whatever this thing is.
The clatter of the door closing, followed by the squeak of sneakers on the floor tell us someone entered, but we can’t see them through the wall of computer junk obstructing our view. This also means they can’t see us, so yay for that.
Initially, adrenaline keeps my attention fixed on the action at the other side of the room. Soon, though, hormones interrupt our regularly scheduled caper to parade neon signs of awareness that I’m pressed tightly against Marcos Oliveira. Yes, my brilliant, urgent spy maneuver was to crush him into the wall. To press my body against his in an invisible cocoon of stealth. Except this cocoon is suddenly hot. And hard. And electrified with the current of a thousand server racks. It’s inhabited by a sun god who stares down at me with blistering, intelligent eyes and full, tempting lips. Those lips spread into a smile—nay—a challenge, when they catch me gawking. An I-dare-you-not-to-touch-me-right-now message. His hard chest joins the taunt, molding solid muscle to my soft curves. His hips, gah, I can’t decline that invitation. It’s not my fault. They just—react, aligning with his of their own accord. And when his chest swells with a labored inhale at the friction, a shudder runs through me. My hands don’t know what to do either, and soon they’re exploring belt loops at his lower back. Fingers coil around fabric, hooking in until they have no choice but to pull our hips into a firmer embrace. His eyes clench shut, his breathing rapid like mine. His heart—I can feel the raging pulse, or maybe that’s mine. Where does he end and I begin right now? We’re not ourselves. We’ve melded into that new entity—that throbbing, scorching cocoon. My lips burn with a hunger to explore his neck. I grip the belt loops tighter, needing to breathe soon so I don’t lose control of a gasp and give us away.
Somehow, I manage to break one hand away, but it gets sidetracked on the return journey. Instead of safety, it seeks his chest, palm opening wide for a full, greedy experience as it slides from his waist, up solid, mouth-watering planes. My touch absorbs his heat as it travels, tingling from the contrast of the soft fabric of his shirt and the hard angles of muscle beneath. I take extra time exploring his pecs, sinking in and enjoying the way his breathing changes as I rake his skin with my nails. My hand should stop when it reaches his collar, but it doesn’t. No, it keeps moving, skimming over his neck and curving behind until my fingers tangle in his hair. My thumb glides over light stubble, locking below his jaw and angling his perfect face right where I want it. Where I need it as I lick my lips and stare at his mouth. My genius stripper intern who couldn’t be more accessible and forbidden in this moment.
“No freaking way,” a voice echoes through the room.
Marcos and I snap our gazes toward the sound. Neither of us move as we wait, our breaths coming heavy from fear now, in addition to desire. Gosh, this is pretty much the most addicting sensation I’ve ever experienced. No wonder James Bond is a thing. 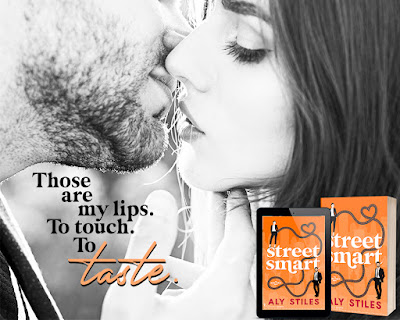