Audio Review: Starting from the Top by Lane Hayes, narrated by Michael Dean (Starting From #4) 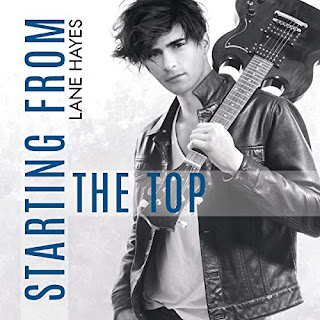 Note: The audiobook was provided by the author via IndiGo Marketing & Design.
I need to confess something. I'm a wee bit addicted to Lane Hayes's audiobooks. I've loved reading her books, but there's just something about experiencing those very same stories with a narrator giving voice to them. The fact that Hayes also happens to have a penchant for choosing narrators who are the best suited for a particular series. Michael Dean has been the voice of her two most recent series, Out in College and Starting From, and the partnership between Hayes and Dean has proven to be a good one. Their latest meshing of talents is the fifth, and also the newest, Starting From audiobook, Starting from the Top.
Johnny Martin is the thirty-year-old guitarist of Zero, an indie band that's making a huge name for itself in the music scene; Sean Gruen is the forty-five-year-old owner of several businesses in West Hollywood and Palm Springs. Johnny and Sean are opposites, with the former being more chill and owning his sexuality, while Sean is more rigid and prefering to keep his private affairs exactly that--private. They are, however, devoted to those that matter most--Johnny his music and Sean his two children, Parker and Penny. Becoming involved with a rock star on the rise could prove disastrous for someone protective of their privacy, but if they give themselves a chance, it could prove to be rather wondrous.
Lane Hayes and Michael Dean have done it again! Johnny and Sean's story gave me all. The. Feels! Dean brought these two to life, and he certainly gave justice to a wonderfully written story by Hayes. Listening to how the main characters evolved from acquaintances to friends to lovers and then into a family together with Sean's kids was a joy. Theirs is a reminder that true love is worth taking a chance on, and that the best kind of life is the one well lived. I laughed, I cried, and I swooned. Five-plus stars for Starting from the Top.
Date Listened to: 27 March 2021
Learn more about Lane Hayes.
Learn more about Michael Dean.
Purchase Starting from the Top on Audible.