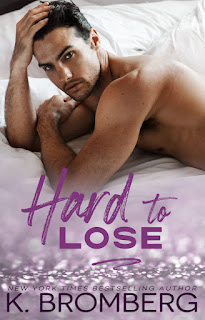 "You're a hard one to corral, Chase Kincade. From the moment I met you, you told me that love wasn't your thing. That kisses are overrated. That being with someone wasn't on your oh-so-busy agenda." He chuckles with the slightest shake of his head. "But somehow I proved you otherwise. Somehow, I was able to break through that very motivated brain of yours and show you that you can still be you with you aspirations and ambition while loving me."

It needs to be said: We need more Ryan Gunner Camdens in the world! K. Bromberg has created quite a few memorable male main characters, but there was just something about Gunner that makes him such a standout. Readers can get to know and fall in love with the guy by way of Bromberg's fourth novel in her Play Hard series, and he's paired with the one Kincade sister who's still single: Chase Kincade, who also happens to be the youngest.
Curiosity may have had twenty-six-year-old Chase Kincade opening a five-year-old letter addressed to her father, but there's something far more inexplicable that has her making the trip from New York to Destiny Falls, Virginia to meet Ryan Camden. He was a twenty-year-old promising baseball player, one who ended up serving his country instead, when that letter was sent. What made him decide to change career paths all of a sudden? Why does she feel such a connection with him? Chase is looking for answers. a possible new client, and positive PR for the agency; instead she finds a hot bar owner named Gunner...
They say that the truth usually has a way of coming out, and the initial foundation of what happens between Chase and Gunner is a lie and a secret. As I was reading their story and seeing how much more deeply they were falling for each other, I lost track of the number of times I was begging for them to be more open and lay all their cards on the table. But then, there wouldn't be much of a story had it all happened at the pace that I wanted it all to play out. And that's one of the best things about how K. Bromberg's written this book: everything flowed rather beautifully, from the moment Chase and Gunner meet to them falling in love and then the conflict coming to the surface and the ultimate resolution. I adored every single lovely bit of it. Five-plus stars for Hard to Lose!
-------------------------
Read my reviews for the Play Hard series: