Book Spotlight: Knit, Purl, a Baby and a Girl by Hettie Bell 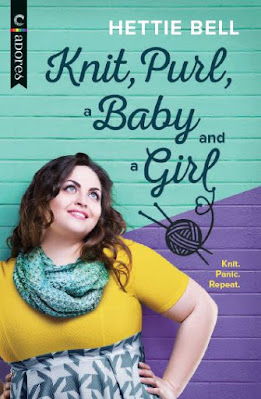 Knit, Purl, a Baby and a Girl
by Hettie Bell
Release Date: March 30, 2021
Carina Adores
About Knit, Purl, a Baby and a Girl
Some people can’t wait to have babies. They’re ready for it—with their perfect lives and their pregnancy glow…
Poppy Adams doesn’t have a perfect life, and she wasn’t ready for the positive test. An unexpected baby—Poppy’s unexpected baby—won’t exactly have her family doing cartwheels. But she’s making the right choice.
Right?
Poppy’s totally got this. She just needs a little encouragement, and a knitting group is the perfect place to start. Baby blankets, booties, tiny little hats—small steps toward her new life. But she feels like she’s already dropped a stitch when she discovers the knitting group is led by the charismatic Rhiannon.
It’s not exactly a great time to meet the woman who might just be the love of her life. While the group easily shuffles around to make room for Poppy, it’s not so easy fitting her life and Rhiannon’s together. With the weeks counting down until her baby arrives, Poppy’s going to have to decide for herself what truly makes a family.

An Excerpt from Knit, Purl, a Baby and a Girl
It doesn’t take long for everybody in the group to set aside their own projects to focus on me and mine.
Grace has my ball of yarn in her hands, twisting the strand between her fingers critically. “If you’re knitting for a baby, you should really consider a nice bamboo…”
Louise is scrutinizing my choice of project. “You know, I started with dishcloths, then graduated to scarves. It’s not as glamorous, but it does let you get the fundamentals down.”
“Oh, my, no.” Mary flips the free pattern card I picked up in the craft store and scans the back with critical eyes. “You don’t want to do this, this is for a completely different weight of yarn than what you’ve got here. Where did you pick this up? They should be putting these patterns next to the suggested yarn. This one calls for fingering. What you need to do is get an account on Ravelry and find a pattern that’s been user-rated so you know it’s accurate and suitable for your skill level, and do that. You can search by yarn weight on there, too. This yarn is a DK…” She pulls out her phone, trailing off as she opens her web browser.
Damian, who has been sitting silently so far, takes this chance to finally speak up. “Do you have needles?” he asks plainly, no judgment in his tone. Nobody else has bothered with that crucial detail to this point.
Now those, at least, I do have. I reach into my purse and pull out the needles I scavenged from my last failed scarf project. I hold them up for the group’s inspection proudly.
“Poppy, no!” they say in unison, and even Damian joins in their exclamation of dismay. “These will never work!”
My shoulders slump. “What? Why?”
Louise clucks at me. “Much too big! Too long for a tiny baby pattern and too thick for this yarn. You’re going to end up with stretched out knitting full of gaps and holes.”
The familiar urge to just give up and quit hits me hard and fast, like a gut punch. I gust out a breath, slumping in my seat.
A hand closes around my shoulder. Rhiannon. “Hey, don’t feel bad. First time I tried to knit, I got my needles secondhand from the thrift store and accidentally bought two different sizes.” She laughs and shakes her head. “Here. If you don’t mind that they’re not high-tech Addi Turbos, you can borrow some needles from me.”
“She needs a pattern first,” Mary puts in. “And personally I think she should start by knitting mittens before she graduates to booties.”
“I guess that sounds all right.” I know they’re just trying to help, but I feel overwhelmed and outnumbered. But what would the alternative be? For them to sit there focused on their own projects, socializing with each other and ignoring me as I struggle?
It’s Rhiannon, once again, who calms the chaos, both the stuff going on around us and the stuff in my head. “Okay, okay, give the girl some space, now. Mary, can you search Ravelry for a pattern for a set of mittens and booties? And Grace and Louise, can you wind Poppy’s skein real quick so she doesn’t get stuck untangling yarn barf on her very first project?” My fellow stitch n’ bitch members nod, immediately turning to their tasks. She turns to me. “I left my straight needles with the rest of my stuff back at my place. It’s just a short walk from here. You wanna come and keep me company?”
“You’ll need a size five needle by the looks,” Mary calls, eyes glued to her phone.
Rhiannon looks at me expectantly, awaiting my answer. I get the sense that if I said no to her invitation, she’d be totally cool about it. But I don’t want to say no.
“Sure, yeah. Can I leave my stuff here?”
“We’re not leaving any time soon,” Damian flaps a hand. “Go, go. Sooner you go the sooner you get back, sooner you get back the sooner you can get started, and the sooner you get started the more time you have knitting with people who can pick up your dropped stitches.”
“Gotcha.” I nod. “Thanks.”
“Ready?” Rhiannon asks. She grabs a cookie for the road, stuffing it halfway into her mouth and holding it there comically.
I fight down the sudden image of myself biting that half a cookie right out from under her nose.
Wow, do I need some air. And some semblance of hormonal balance.
Instead, I’m getting alone time with Rhiannon.
Crash and burn time, here I come. 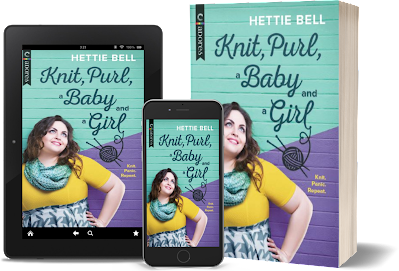 About Hettie Bell
Hettie Bell grew up in small towns in New Brunswick and British Columbia, and now lives outside Edmonton with her family. She first fell for Highland historicals as a preteen, and that love deepened as the romance genre grew more diverse and queer. A proud bisexual woman, she’s honored to write all the happy endings she never thought she’d get to read. When she’s not writing, she's knitting one of at least three projects she has on her needles at any given time.
Connect with Hettie
Facebook | Twitter | Goodreads 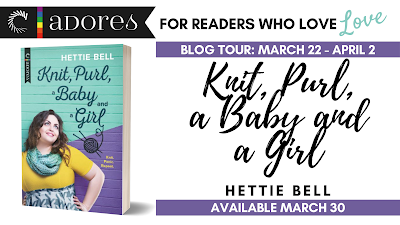