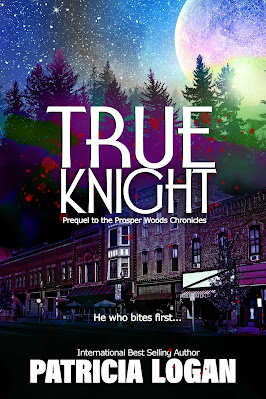 True Knight
(Prosper Woods Chronicles #0.5)
by Patricia Logan
Date Released: March 23, 2021
About True Knight
My name is Romeo Harmon and I’m the new sheriff of Prosper Woods, a small California town smack dab in the middle of the sequoia forest. People around here tell me the town hasn’t changed a whole hell of a lot since power lines and telephones were installed. It’s a quaint place with a movie theater that shows the old classics, a saloon with a decent choice of beer, a general store with a grumpy old coot behind the till, a gas station with a pimply young mechanic, and a bed and breakfast that attracts tourists and vacation money.
I think I’m gonna like it here.
My name is Vincent Lasco. I’ve searched a long time to find a new place to settle down. Because of what I am, I need to pull up stakes and start over every twenty years or so—before people realize that I don’t age anymore. Prosper Woods has everything a man like me could ever want. Though there aren’t many humans, it doesn’t really matter. I’m so old, I don’t need to eat very often and there’s no reason to expose myself to the locals whom I hope to call friends someday.
I think I’m gonna like it here.
There’s newcomers in town. Prosper Woods is a nice place as long as you’re passing through. I wonder how long these folks will stay once they find out what’s really going on here. Somehow…
I don’t think they’re gonna like it here.
(True Knight is the prequel to the Prosper Woods Chronicles and includes an excerpt from True Mate, the first book in the new series.) 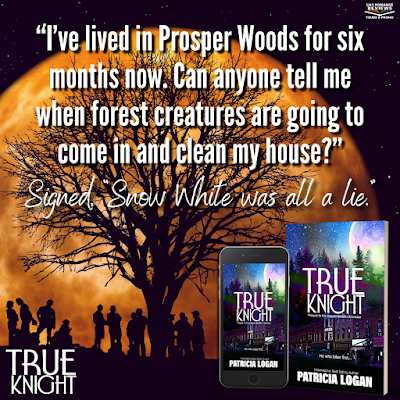 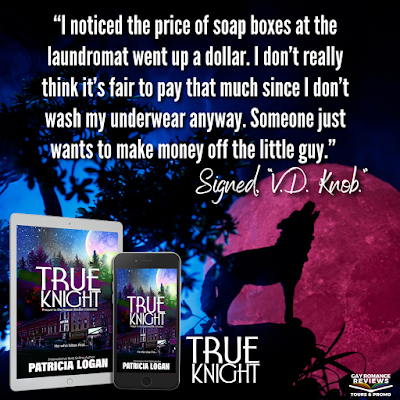 An Excerpt from True Knight
As I left the saloon, I was thinking about the bartender I’d just met. Greg had been very friendly as we sat and talked for an hour over the two beers he served me. I didn’t get the gay vibe when he talked to me, just the sheer cheerfulness which came off the man in waves as he talked about the town. He sure loved it here, loved walking in the woods alone or with his friends. He’d made me feel welcome and I was grateful for it. Maybe my move to Prosper Woods was going to turn out to be the best thing I’d ever done. So far, all the people I’d met had been friendly with the only exception being Sid Farrell who ran the general store.
As I stepped outside, I lifted my face intending to look up and take a minute to gaze at the stars in the clear night sky. Instead, an odd feeling stopped me in my tracks and I turned to look down the street. Parked outside of a row of brick buildings which accommodated a handful of stores, was a large moving van. Two men were carrying a red couch into the building but they were not who drew my attention. A man with shoulder-length dark hair stood on the sidewalk, looking my way.
The second our eyes met, I felt a pulse of electricity like a shock running through my body. It was stronger than the one I’d felt when I’d shaken hands with Sid at the store… and vastly different as well. The pulse slowly ran over my skin like a wave and went straight to my cock. Inexplicably, I felt myself growing hard.
What the fuck?
I reached down and pressed the heel of my hand against the zipper of my jeans, silently willing my erection to go away. I had no idea what was happening to me but when the man smiled and began walking toward me, chills ran down my spine. I’d never had a reaction to another man like this before. Sure, I’d picked up a lot of guys who’d stared at me in clubs or stalked me around a room until I promised to dance with them, but I’d never felt like I was being drawn to someone by an invisible thread.
I stepped off the curb, still watching the man intently, and began walking toward him. My cock was straining against the confinement of my jeans and that very fact could prove impossible to explain. Oddly enough, for some strange reason, it didn’t seem to matter to me at all. I felt like I was in some sort of peculiar dream state. When he was twenty feet away from me, I noticed the fullness of his lips and the squareness of his jaw. The stubble on his chin fascinated me as he came closer. 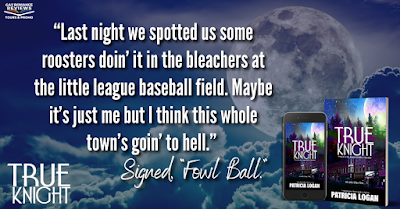 About Patricia Logan
International bestselling author Patricia Logan, resides in Los Angeles, California. The author of several #1 bestselling erotic romances in English, Italian, French, and Spanish lives in a small house with a large family.
When she’s not writing her next thriller romance, she’s watching her grandchildren grow up way too soon, and raising kids who make her proud every day. One of her favorite tasks is coaxing nose kisses from cats who insist on flopping on her keyboard while she tries to type. She counts herself lucky to be surrounded by people who love her and give her stories to tell every day.
Become a fan of Patricia at http://authorpatricialogan.com.
Email her at patricialogan.author@yahoo.com. She loves to hear from readers more than anything and will respond to all emails.
Connect with Patricia
Website | Facebook | Twitter | Instagram | Goodreads | Amazon | eMail 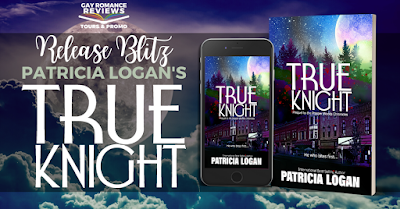