Review: Not So Sincerely, Yours by A.M. Johnson (For Him #2) 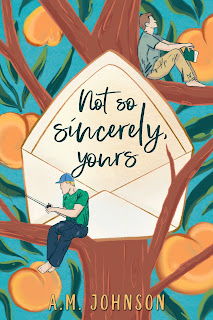 I pressed send and exhaled. My irritation ebbing as I watched the dots dance across the bottom of the phone. he must have been writing a dissertation because three minutes had passed without a reply. I was about to set my phone down when his name popped up on my screen.

This was the book that was never supposed to happen. I recall A.M. Johnson mentioning her initial plans for her second novel in her For Him series did not involve Anders Lowe being paired up with Ethan Calloway. These two guys were standout supporting characters in the series starter, Love Always, Wild, but Ethan had a boyfriend by the end of that book. Here's the thing: many readers, myself included, were reeeaaally hoping for these two to get together. So, when Johnson announced that book two would, indeed, have Anders AND Ethan as the main couple, many were surprised but happily so. What wasn't a surprise was that this was going to be an enemies-to-lovers story. I mean, have you met Anders?! If you haven't, go remedy that issue.
Not So Sincerely, Yours is book two in the For Him series, and as mentioned, this has Anders and Ethan as the main characters. Anders Lowe is thirty-six, bisexual, and a literary agent who owns Lowe Literary. He also happens to be Wilder Welles's ex-on-again, off-again boyfriend aside from being his agent.  On the other hand, Ethan is twenty-eight, a recent transplant to Atlanta, Georgia from Denver, Colorado--although he's originally from Bell River, Florida, after he and his boyfriend split up. He's Jaxon Stettler's closest friend and he shares a close bond with Jax's younger brother, Jason. If you're new to A.M. Johnson or this series, Wilder and Jax are the main character from book one, Love Always, Wilder, which I highly recommend you check out.
Anders and Ethan don't exactly leave each other with the greatest of first impressions, so when Wilder asks--badgers--Anders into hiring Ethan as a part-time personal assistant, Anders reluctantly agrees. These two push each other's buttons like they're getting paid to do it, which proves to be rather entertaining. Ethan has preconceived notions about Anders, what with the older man's wealth and decorum, but through emails and text messages, he begins to see this whole other side to the guy. Getting involved with his boss isn't a great idea, but there's no denying the awareness and connection that they have. A line is crossed, but is this some mere office fling, or is it serious enough that rebounding from possible heartbreak could prove impossible?
This book should come with a warning label: Side effects of reading Not So Sincerely, Yours include swooning, happy sighing, and a major book hangover. I just knew I was going to fall madly in love with Anders and Ethan. There was something about the two of them as individuals that had me wanting to give them a hug, and while they're not damaged or broken, they've experienced enough that had them believing they were not good enough to be someone else's first choice or to be someone worth fighting for. But together? GAH! Cue the squeeing. They were perfectly imperfect individuals who filled each other's gaps and spaces like no other person before them could. A.M. Johnson delivers yet again. Five-plus stars for Not So Sincerely, Yours.
-------------------------
Read my reviews for the For Him series: