Review: A Rogue to Remember by Emily Sullivan (League of Scoundrels #1) 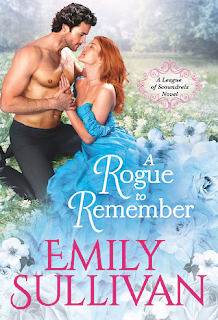 I am a self-confessed bookaholic, one who happens to also nudge and badger into checking out books that I happen to love in hopes that they'll fall in love with them too. Maybe that's why I have family and friends who call me a "book pimp", especially since I have a book blog and all, reviewing and talking about the books that I've come across. Inasmuch as I enjoy bugging people to read more--and not just romance, although this blog IS mostly about that genre--I happen to also like it when people (not in general...more of fellow readers) recommend books they think I should give some love to. Even better? When they gift me a book that I end up absolutely adoring, leaving me smitten, and that's precisely what happened when my bestie gave me A Rogue to Remember, a historical romance and the debut release of award-winning author Emily Sullivan. And did I happen to mention this is the first in the League of Scoundrels series, which means there's more awesomeness to come from this world in the months to come.
Readers are introduced to Lottie Carlisle, a woman who wants nothing to do with London society in general and the demands of her uncle that she marry in particular. Her uncle's threat that if she doesn't procure herself a husband by next season's end, he'll do it for her forces Lottie's hand--and not in the way her uncle may have hoped. She would never wish scandal on anyone...except herself since that would mean that she would be considered less than appealing as a potential wife, leaving her free to pursue her life as she wishes, relishing whatever banishment to a far-off countryside. So when a childhood friend she hasn't seen in five years arrives at her doorstep bearing news of her uncle's dire condition, Lottie knows she must return to London. Being escorted by Alec Gresham, however, was something she could have done without--just like she had no other choice be to do without him--the boy she trusted and loved--over the past years. He walked away from her back then, breaking her heart in the process. Can she trust Alec one more time?
This debut novel and series starter has bowled me over in all the best ways possible. Emily Sullivan is now on my list of new authors to keep my eye on--in an admittedly stalkerish kind of way because I need more of her books to devour. She's given readers a story of childhood friends who were firmly on their way to becoming more until Alec up and disappears on Lottie, with nary a word of goodbye or explanation. So yes, it's a second-chance romance, and I'm glad that Lottie made Alec work for that second chance. I love a female main character who has backbone and goes after what she wants. She also gets kudos for putting Alec in his place whenever necessary. Speaking of Alec, there may have been a time or ten where I was half-tempted to slap him upside the hide in hopes he would realize his lack of communication was a huge part of their issues. Still, I admired his protectiveness and devotion towards Lottie, and once he got his act together, my need to get violent with him ebbed. Another favorite thing about this book? Where it's set, which I won't mention here in case the author intends it to be a surprise to readers (since it isn't mentioned in the blurb). There are a lot of "favorites" when it comes to this book, which is why it's one of my favorite debuts for 2021. Five stars for A Rogue to Remember.
Date Read: 31 March 2021
Learn more about Emily Sullivan.
Purchase A Rogue to Remember on Amazon | Apple Books | B&N | Kobo.